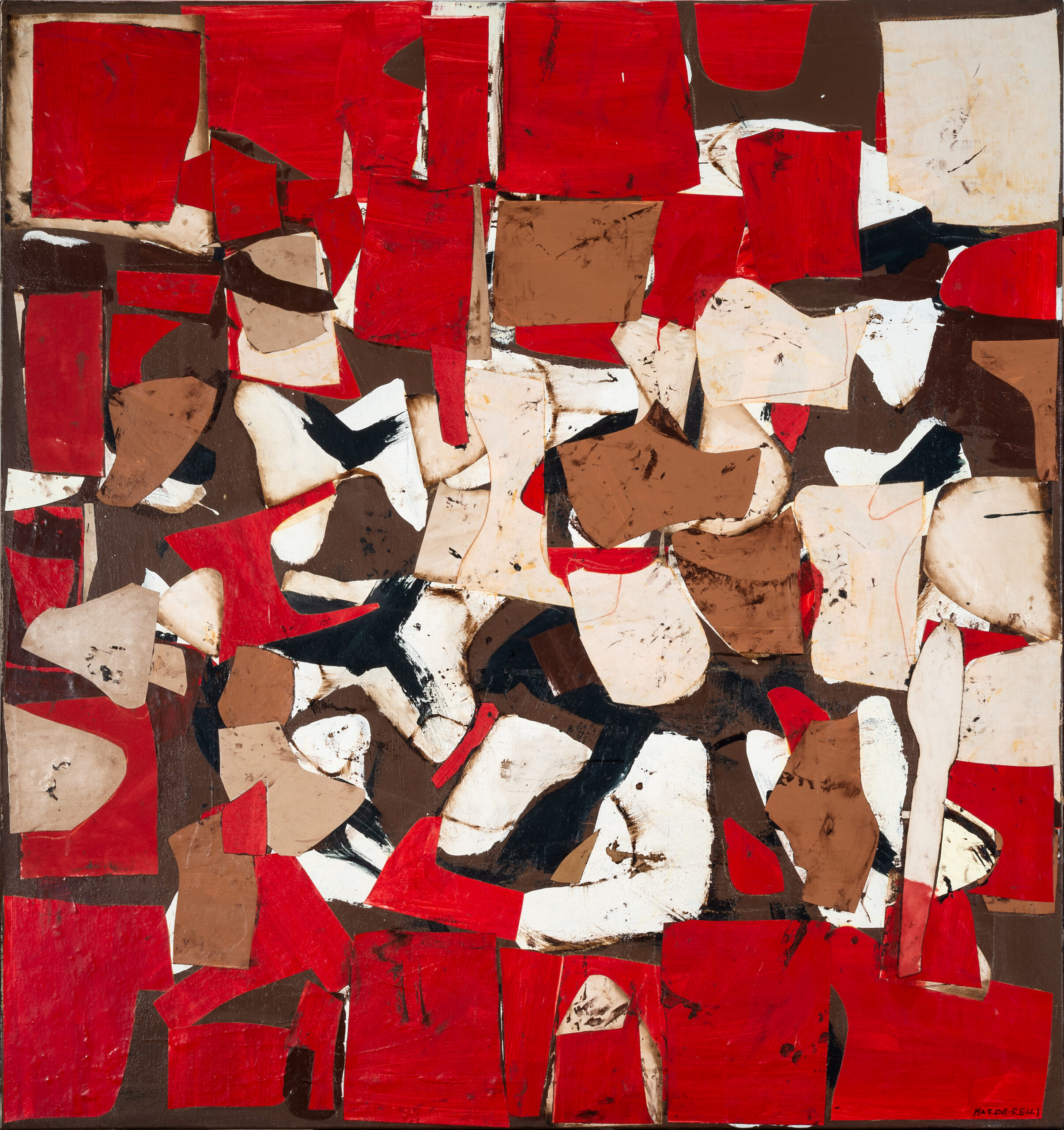 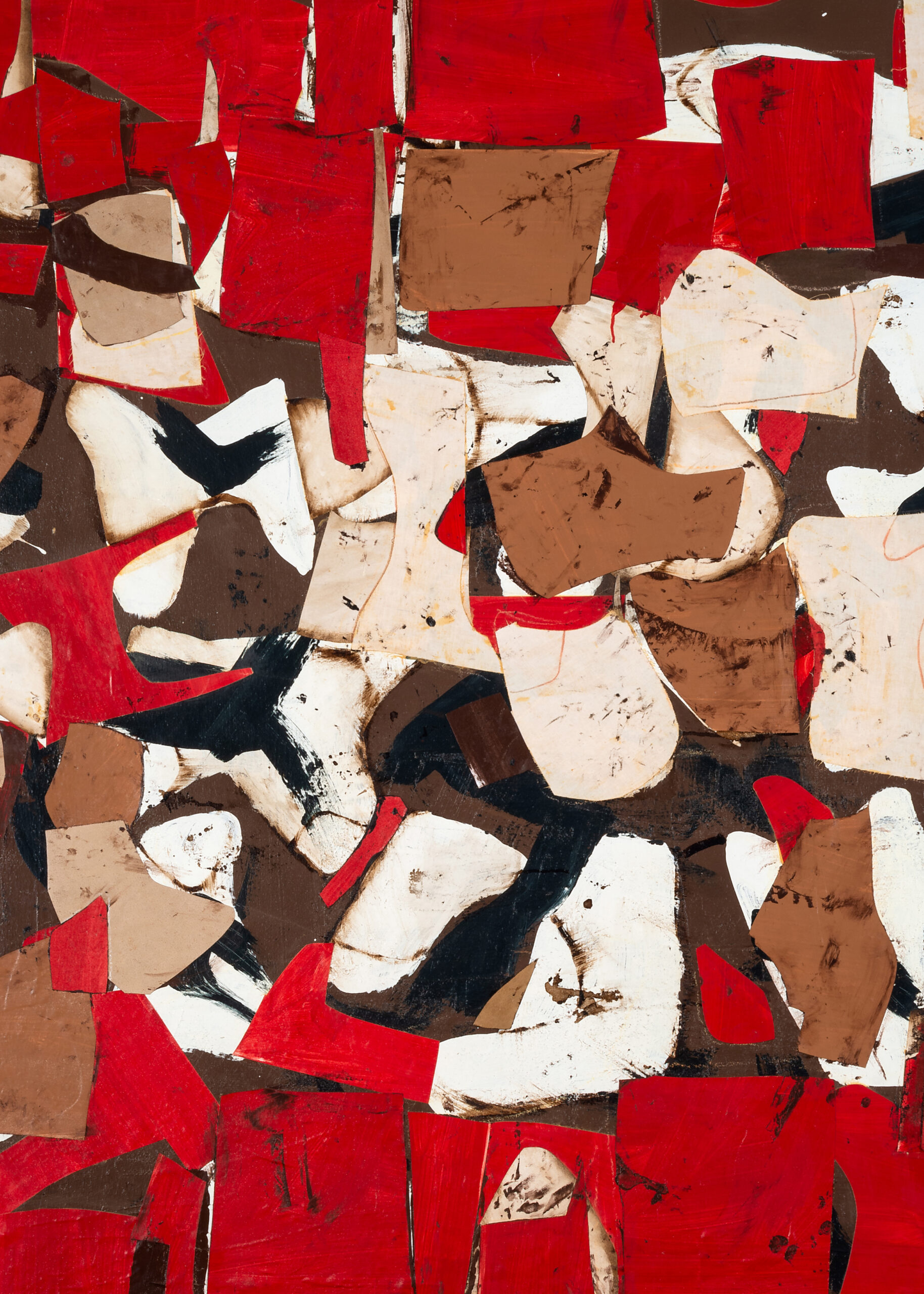 A detail of The Woman of Samura by Marca-Relli. 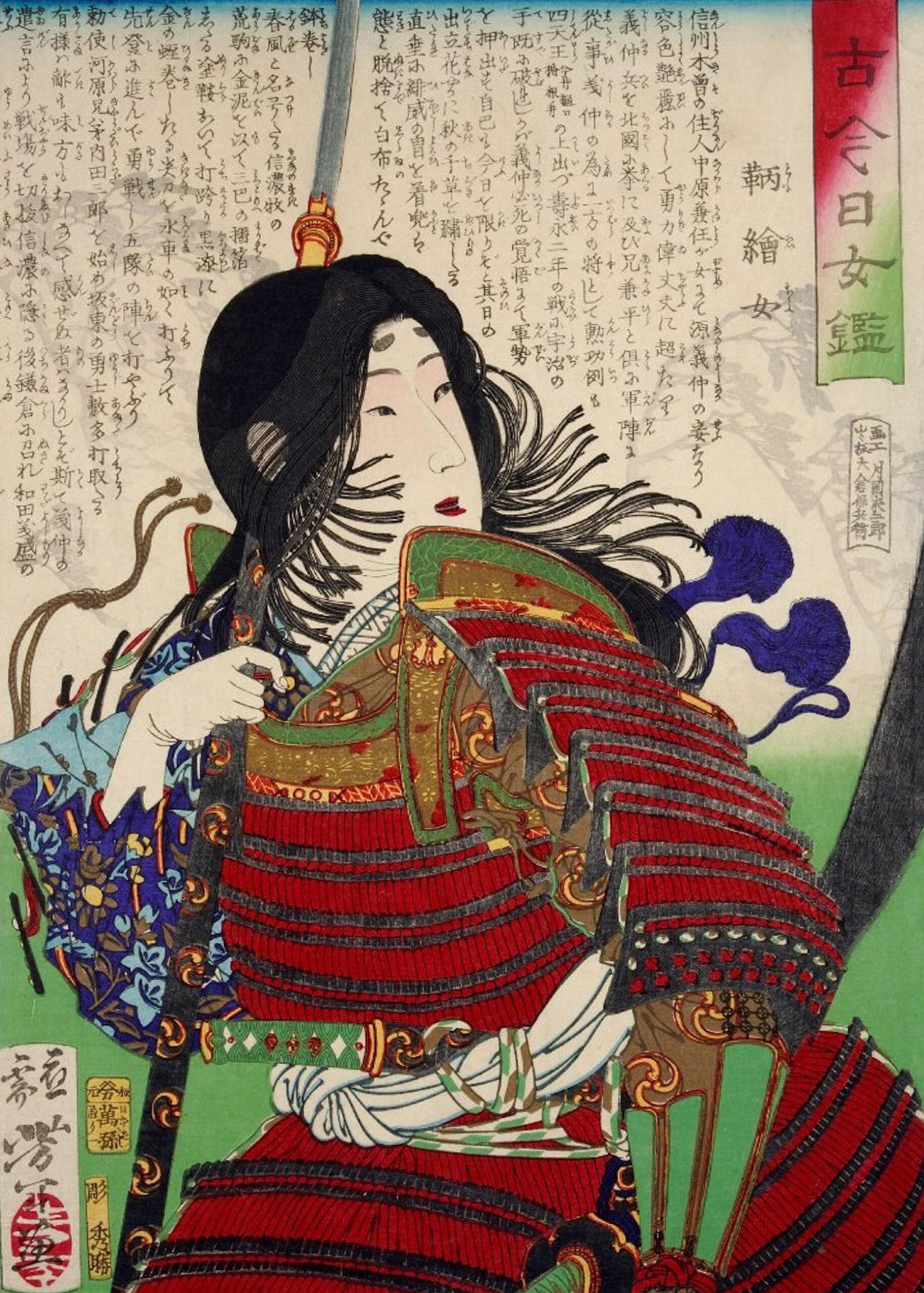 The work is a tribute to the figure of the onna-bugeisha, literally “woman of martial arts”, or the warrior woman belonging to the Japanese nobility who in feudal Japan was trained in the use of weapons to protect her home, family and honor in wartime. Tomoe Gozen, of whom there is an imaginary portrait by Tsukioka Yoshitoshi realized around 1875, is the only female warrior (onnamusha or onna-bugeisha) described in the epic literature of the samurai tradition.

Extraordinary representation of the battle of Awazugahara with the warrior Tomoe Gozen who appears on a black horse surrounded by soldiers, ready to dodge the arrows of the opponents. The blade of her naginata is covered in blood. On the right, a samurai on horseback is about to deliver a fatal blow that the woman is ready to dodge with strength and cunning. Above: Tomoe Gozen at Awazugahara Battle, on February 21, 1184, a woodblock print by Utagawa Yoshikazu dated ca. 1850-1870. 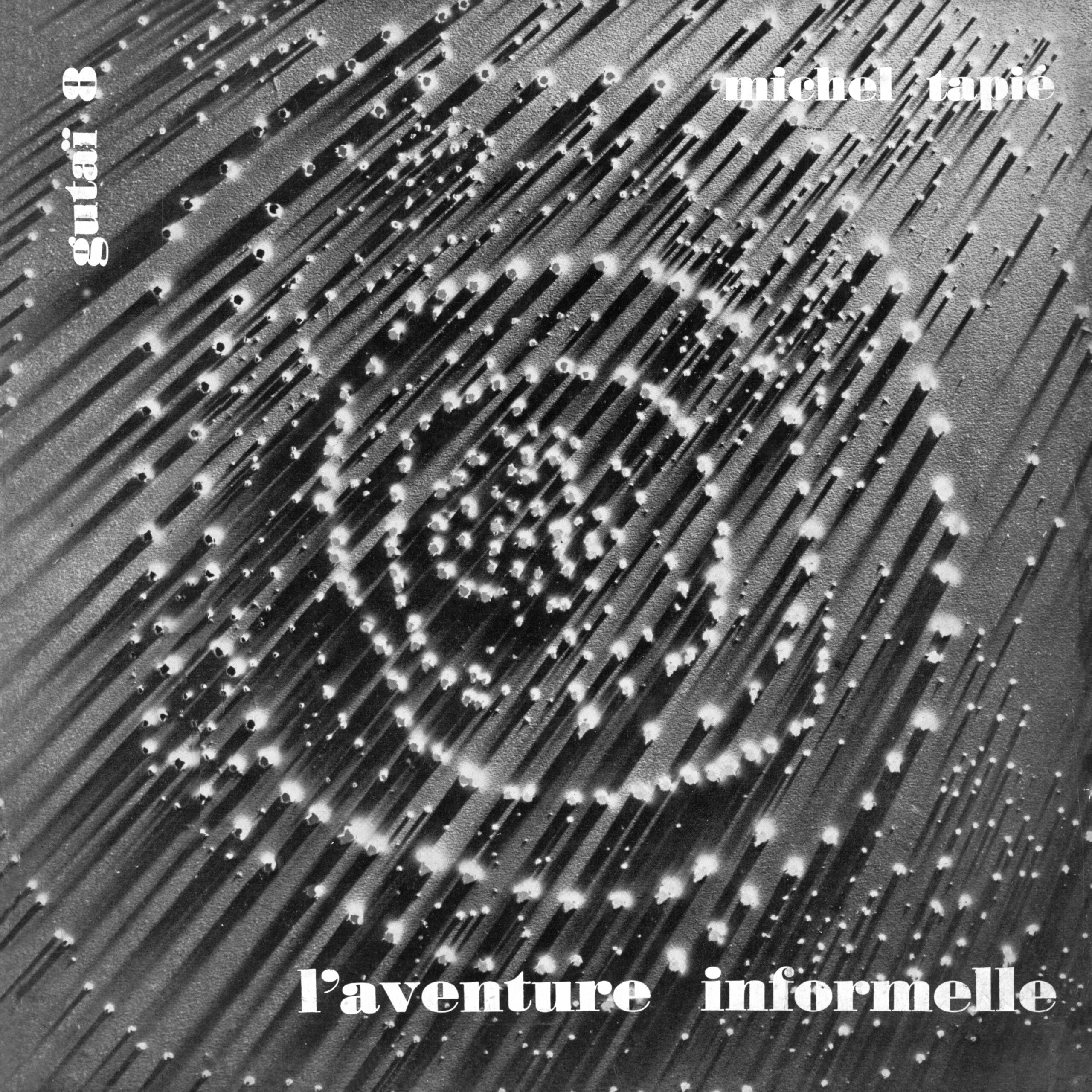 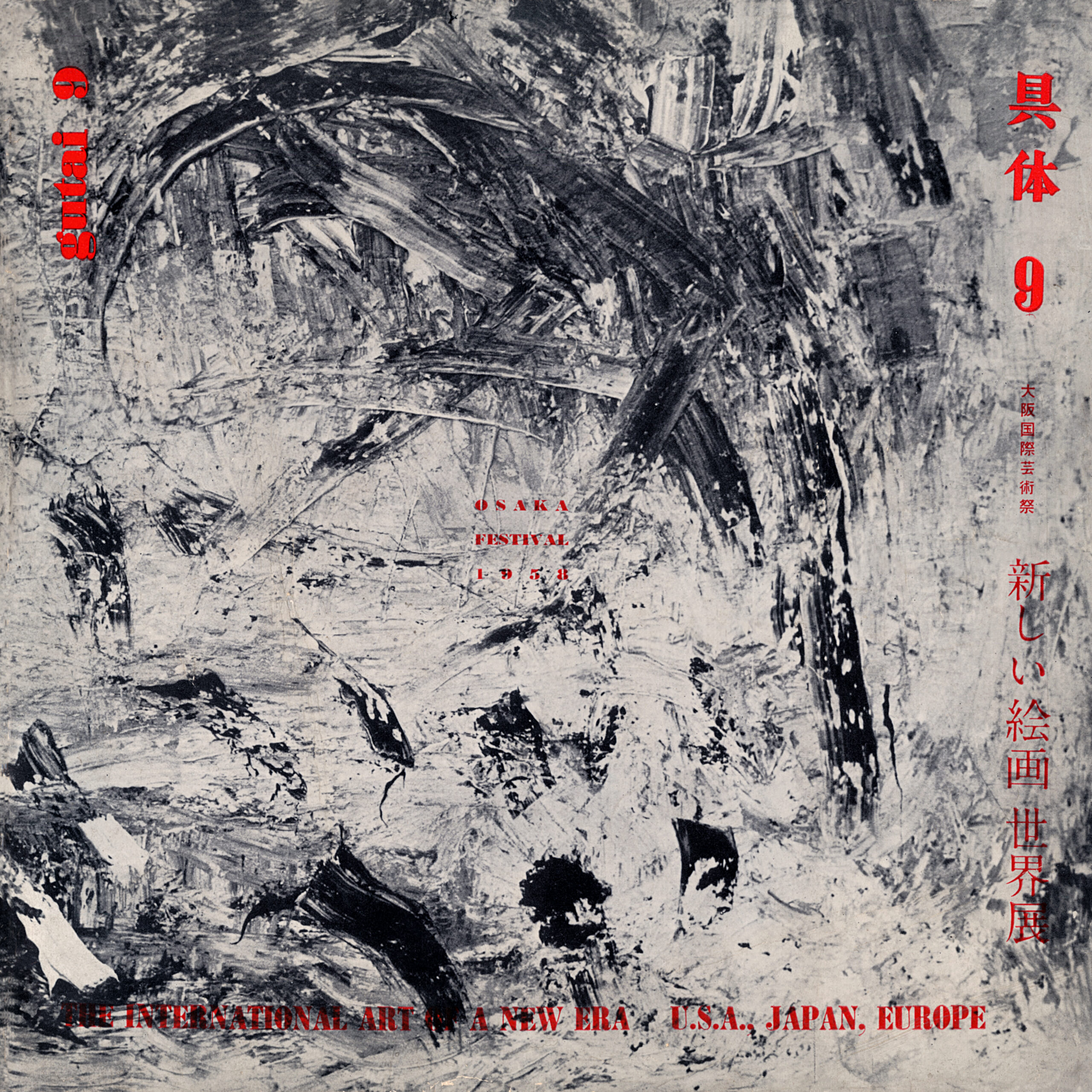 Gutai 9 (April 12, 1958). Cover reproducing a detail of unidentified work by Jirō Yoshihara, ca. 1958. Special issue edited by Michel Tapié and Yoshihara that served as the catalogue for the exhibition International Art of a New Era: Informel and Gutai.

Marca-Relli paid homage to the “Women of Samura” in the period in which he had contacts with Michel Tapié and the Japanese world.
Tapié documented his work in the special issue printed in Nishinomya, Japan in 1957: Gutai 8: L’aventure informelle.
In 1958, the French critic invited him to participate in the exhibition International Art of a New Era, organized with the Japanese artist Jirō Yoshihara for the occasion of the International Osaka Festival. The show featured 120 works by eighty-five artists from Europe, United States, and Japan.

This website uses cookies to improve your experience while you navigate through the website. Out of these cookies, the cookies that are categorized as necessary are stored on your browser as they are essential for the working of basic functionalities of the website. We also use third-party cookies that help us analyze and understand how you use this website. These cookies will be stored in your browser only with your consent. You also have the option to opt-out of these cookies. But opting out of some of these cookies may have an effect on your browsing experience.
Necessary Sempre abilitato
Necessary cookies are absolutely essential for the website to function properly. This category only includes cookies that ensures basic functionalities and security features of the website. These cookies do not store any personal information.
Non-necessary
Any cookies that may not be particularly necessary for the website to function and is used specifically to collect user personal data via analytics, ads, other embedded contents are termed as non-necessary cookies. It is mandatory to procure user consent prior to running these cookies on your website.
ACCETTA E SALVA