Galleria dello Scudo, one of ITALICS founders, is pleased to announce the first in-person event of the consortium. ITALICS, the first consortium in Italy to unite the main galleries of ancient, modern and contemporary art, presents PANORAMA, an island-wide exhibition on Procida (off the coast of Naples) from Thursday, 2 September to Sunday, 5 September 2021, curated by Vincenzo de Bellis, Associate Director and Curator for the Visual Arts at the Walker Art Center in Minneapolis. The exhibition is part of the program of initiatives “Towards Procida 2022”.

This is the first of a series of exhibitions gathered under the title of PANORAMA, which ITALICS will dedicate periodically to recount some of the most fascinating places in Italy, in an offline continuation of the extraordinary journey begun in October 2020 on the pages of the website Italics.art.
The first edition of PANORAMA, taking place on the island of Procida, a picturesque location distinguished for its intellectual bent and natural surroundings, takes the form of a long conversation between the curator Vincenzo de Bellis and Agostino Riitano, director of Procida Capitale Italiana della Cultura 2022.

The exhibition offers a selection of artworks spanning sculpture, painting, video, performance and installations from a wide range of historical and production contexts. The exhibition route develops along exhibiting sites scattered on the island, including public and private buildings, churches, historical palaces and popular areas, all pivoting around the fortified village of Terra Murata, dominated by Palazzo d’Avalos (1563), a former prison citadel.
The constant dialogue between the curator Vincenzo de Bellis and Agostino Riitano highlights a few of the key features of the project: the relationship between artwork and a highly distinctive milieu like that of the island, social potential, understood as an attempt to update communication and the use of art and, last but not least, the dialogue with the institutions.

While spreading the project on the whole land, PANORAMA presents not only its artworks, but houses, churches, roads, terraces, squares and Procida inhabitants as well. ITALICS is thus renewing its commitment to promote the beauty of Italy in all its profound complexity, through the eyes of Italian gallerists.

Accomplished thanks to the support of Intesa Sanpaolo and Tod’s, the exhibition avails itself of the support of Campania Region and Fondazione Donnaregina per le Arti Contemporanee – Museo Madre, the patronage of the Municipality of Procida and the collaboration of Museo e Real Bosco di Capodimonte.

Galleria dello Scudo exhibits here the work DantElegia by Luigi Ontani, realized in Faenza ceramics in 1998. The artist portrays himself as Dante Alighieri, whose seventh centenary of death is celebrated this year. The sculpture (01_panorama_mappa_mostra, n. 29) will be located in the hallway of the seventeenth-century Palazzo Scotti, in via Vittorio Emanuele 153. 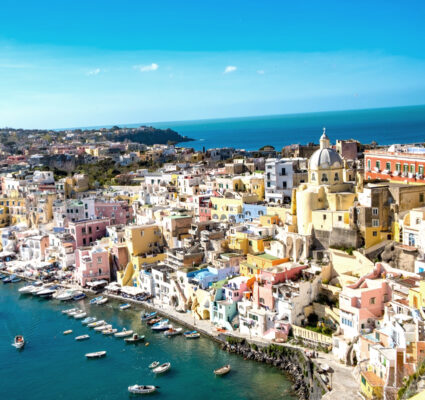 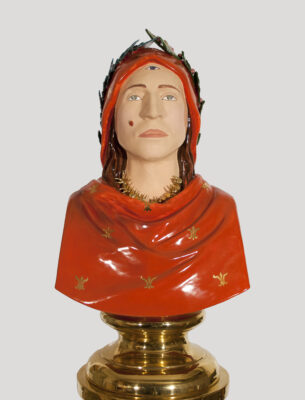