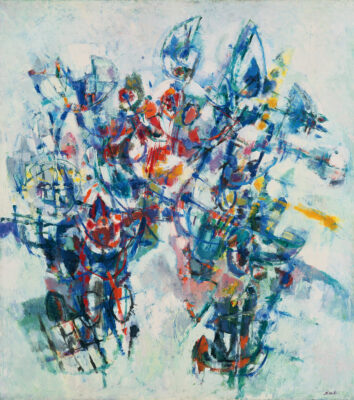 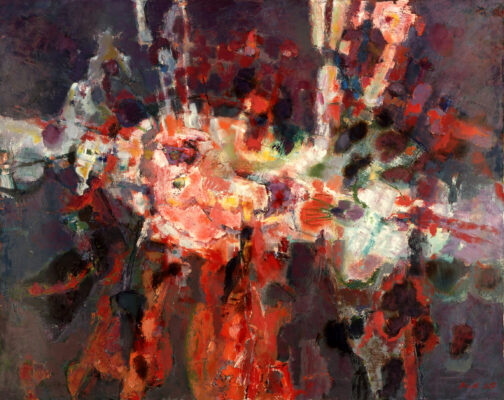 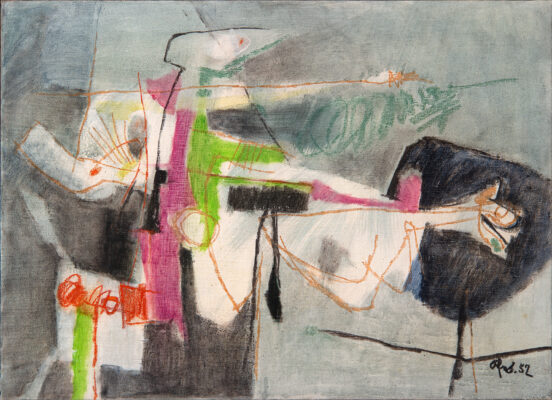 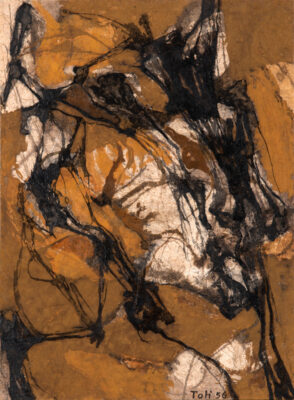 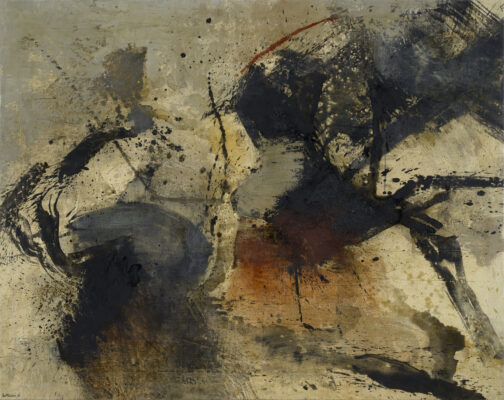 As from May 22, 2021, the exhibition Spazio aperto will be presented at Galleria dello Scudo. The title hints at a place of confrontation between different aspects of abstract art in Italy after World War II. Some of the exhibited works have been selected since they are considered a peculiar reinterpretation of the concept of “place” and “space”, demonstrating how the morphology of analysed contexts in their visual components can become an inexhaustible source of inspiration.

The exhibition is introduced by Afro and Renato Birolli, personalities at the centre of the debate between abstract art and realism, merged since the early 1950s into the experience of Gruppo degli Otto. The two artists, then joined by Giuseppe Santomaso, were among the most fervent supporters of the gradual bent of pictorial research towards a complete non-figurative nature, while maintaining precise object references in the titles. The initial cue, drawn from experience, appears to be reworked in such a radical way that it loses its original reference, making the urge to trace the initial cue superfluous, if not downright misleading. Two large drawings by Afro are exhibited here, both of which precede the execution of the canvases that faithfully reproduce the same compositional structure.

Anyhow, Birolli is the best interpreter of the idea of “space” as the origin of pictorial imagery. Since the early 1950s, his works have been increasingly inspired by visions of the Italian landscape, closely linked to the Ligurian places where he loved to take refuge, such as Manarola: the human figure disappears while nature becomes the real protagonist. “To ‘natural seeing’ I oppose ‘natural dreaming’. The weakening of large areas of contemporary art is due to the lack of the ability to ‘see’”, Birolli said in 1954.

Incendio nelle Cinque Terre (1957) can be considered among the most significant paintings belonging to the cycle dedicated to “Cinque Terre”, begun already in the summer of 1955, during a stay in Manarola. “For three days, great fires have been galloping on these scorched mountains, from Monte Rosso to Rio Maggiore. The night is full of cyclopean volcanoes and the day of immense mythical smokes…. The Cinque Terre teem with scary smokes. They impress me. I put aside all the work I started and began a large canvas on the fires in Cinque Terre. At last a great contrast of reds, greens; of blacks, browns and reds; of black-purples and reds or red, red and purple” (letter written by Birolli to Cavellini, August 23, 1955).

Between 1958 and 1959, the artist began to match suggestive musical titles to his works: “Not out of a strictly musical idea I painted the large canvases of Canti fiamminghi, in Antwerp and Milan, in the two winters of 1957 and 1958... To escape nature’s trap, it must be considered as a real term, indeed, as the ideal and disinterested, as well as necessary, environment within which every development of reality itself is determined: physical and moral, i.e. concrete. Only concrete reality generates vast and continuous conditions. But only moral reality concerns all the arts, even the most abstract, which is music.”

The relations between Afro, Birolli and Toti Scialoja are in this period of close collaboration, strengthened by the summer stays spent in Procida, the island then attracting American artists such as de Kooning, Rothko, and Twombly. In September 1957 Birolli spent a week there. In the late summer of 1957 Scialoja drew up his first Impronte, preceded by a series of large-scale paintings conceived on his return from his trip to New York. The canvas entitled Strappo belongs to this cycle of works, in which the use of transparencies predominates, letting the colour slowly emerging as if from the depth of the surface.

In the large horizontal format, the tangencies and distances of Abstract Expressionism canons can be read. Scialoja still shuns the all-over which will prefigure itself in the later experiences, maintaining a dialectic between full and empty within the field of the page. In the drastic reduction of the chromatic register, the artist foreshadows the radical choices of 1960-61, making the tonal chords inherited from Morandi’s lesson coexist with acute sensitivity. “I try to reconstruct lumps, perhaps, not ‘forms’: densities, confluences, ganglia, shadow seals, in the shadows, centres of light, the anxiety of a living articulation for something that will never be defined. Encounters with myself: knots, collisions perhaps, held together by a persistence that is love, a source that always starts to flow again, the repetition of the same note”, so Scialoja writes in his Giornale di pittura.

The centrality of the gesture that becomes violent in Scialoja, hinging on chromaticism clearly departing from the skilful tonal agreement governing the composition, re-emerges also in the work by Giuseppe Santomaso, another protagonist of the Italian scene.

The evolution of lyrical abstraction towards a personal idea of “Abstract Expressionism” is perceivable in his research already at the end of the 1950s, and more fully in the early 1960s, when the typical body drafts, for example of the cycle of “Cantieri”, being the result of stratifications, are followed by other interventions with splashes of colour and drippings. The two trips to Puglia in 1960 with Werner Haftmann gave him suggestions then merged into paintings such as Verso Matera or Paese, offering the spur to draft ideal “travel diaries”, born of strong emotional tensions. “From the images of memory and from those formal crystallizations, a flow full of images is born in the painter […], a dialogue full of tension, from one moment to the next” (W. Haftmann, 1964).

If the memory of a real or imaginary place runs through Santomaso’s work by relating the “soul” of the forms with the “soul” of the colours, in Emilio Vedova it gets highly specific values. After the series inspired by places he himself visited, such as Dal diario del Brasile or the cycles Per la Spagna, these latter conceived with very specific purposes of political denunciation, in the 1970s it was America that animated the artist’s expressive repertoire, the country that after World War II collected the legacy left by Europe as the epicentre of contemporary art, but also the place of contradictions and social disparities, which the artist feels the duty to denounce, so as to prove that he is not an inert witness to abuses he considers unacceptable.

De America, therefore, is the title of a series of large-format paintings from 1976, which will be joined the following year by smaller canvases, offering the viewer a completely personal reading of the overseas world, full of tensions and of contrasts seen, not surprisingly, through a black and white palette. 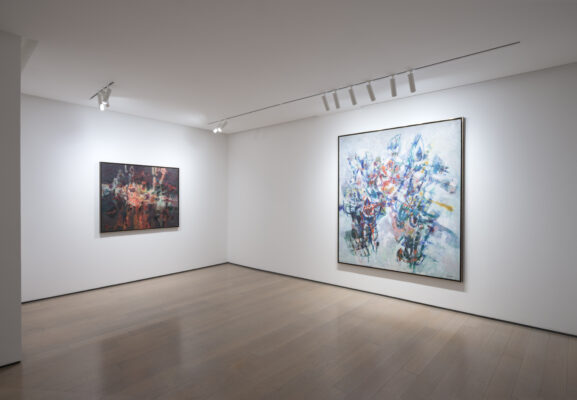 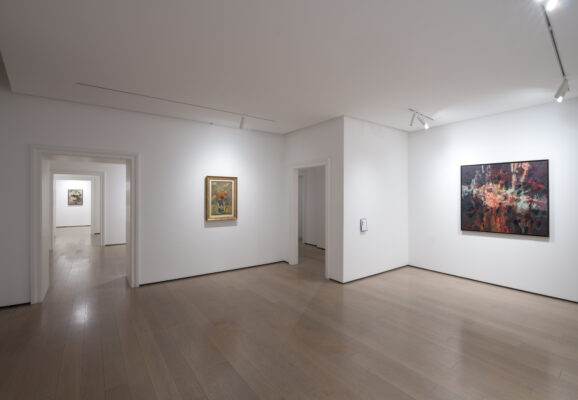 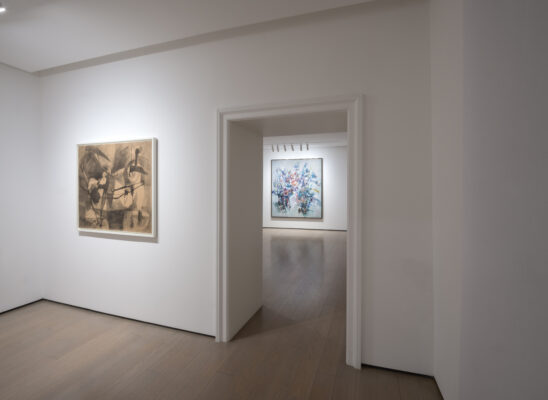 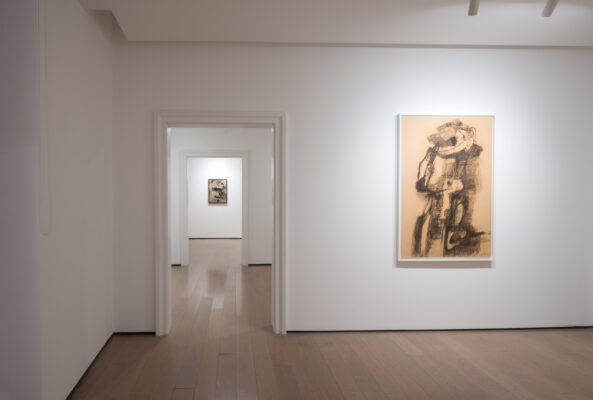 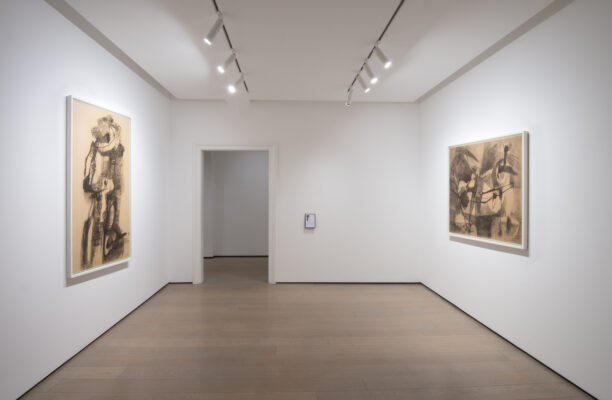 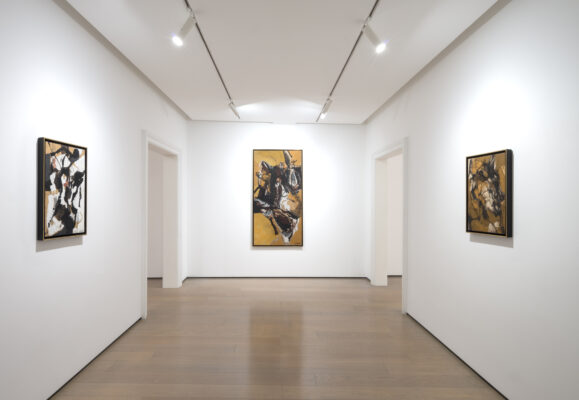 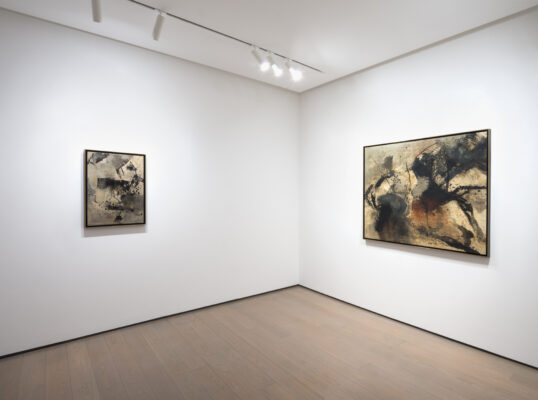 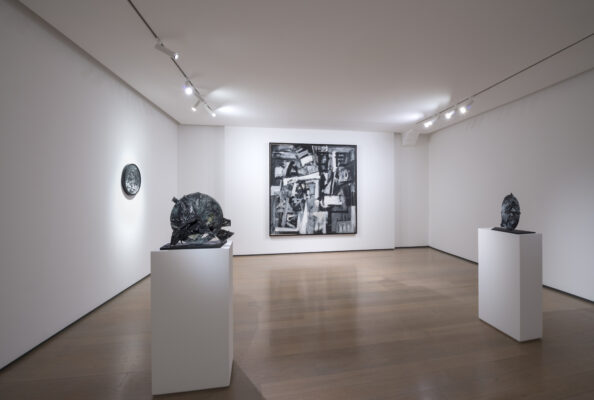 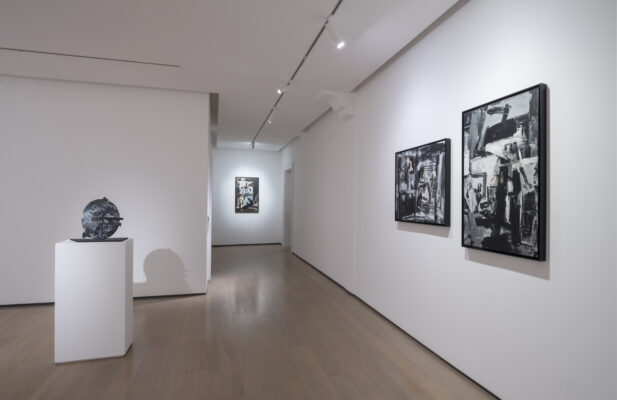 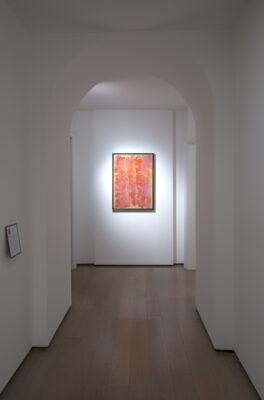 Afro Basaldella, born in Udine in 1912, is one of the best-known abstract Italian painters, He began exhibiting in Milan during the ‘30s in the same period that his brother, Mirko, came to be known as a sculptor. In 1934 he moved to Rome, coming into contact with the city’s artists. He took part in national and international exhibitions including the Venice Biennale in 1936.
↣ More info 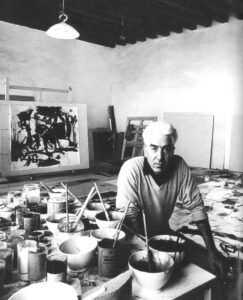 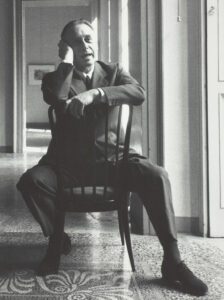 Giuseppe Santomaso was born in Venice in 1907, son of a master goldsmith and gemstone merchant. He began to devote himself to painting very young, participating for the first time in 1926 in a group show at Bevilacqua La Masa, where he returned to exhibit in the following years. In 1934 he made his debut at the Venice Biennale, where he returned in 1935 to the Mostra dei Quarant'anni and later in numerous editions. The trips to Holland and Paris in 1937 lead to a turning point and the abandonment of a language related to post-Impressionism.
↣ More info 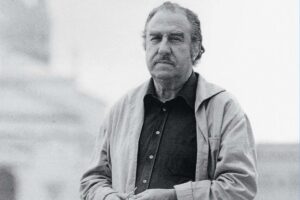 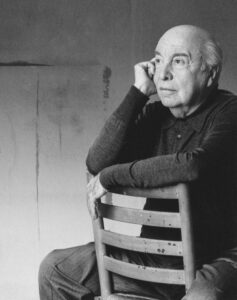 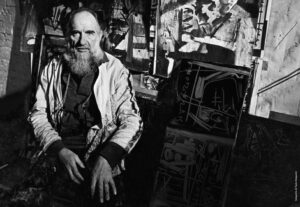