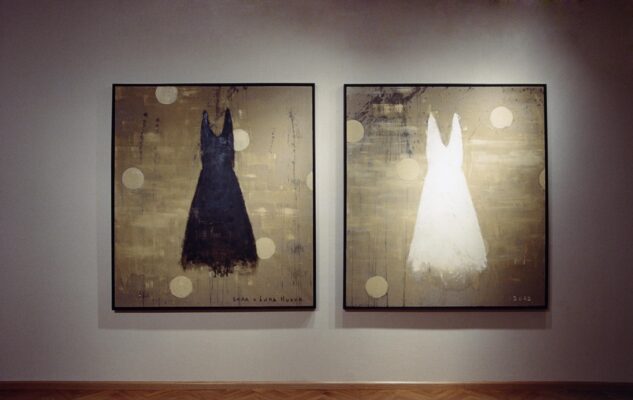 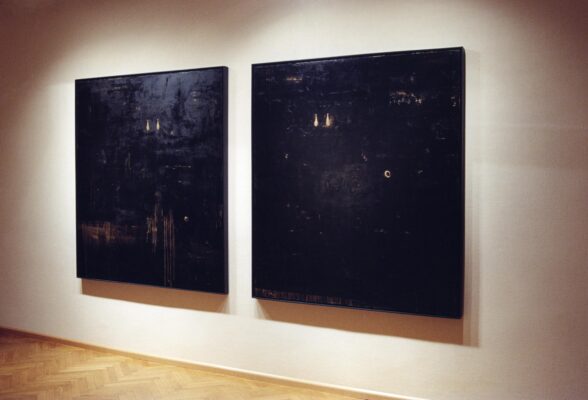 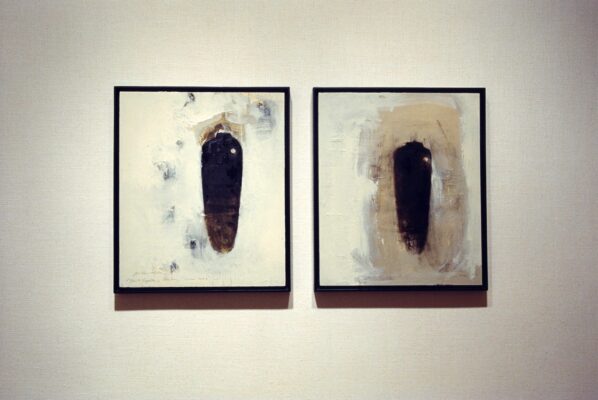 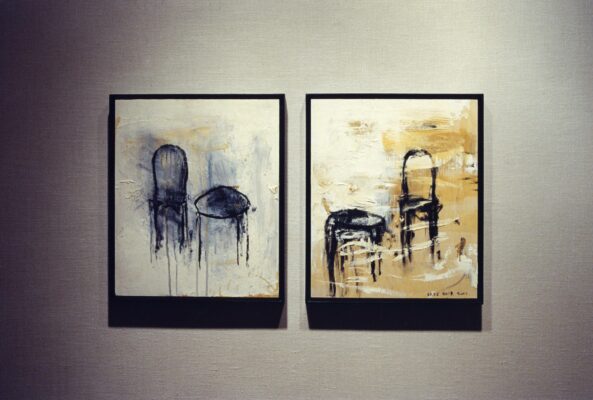 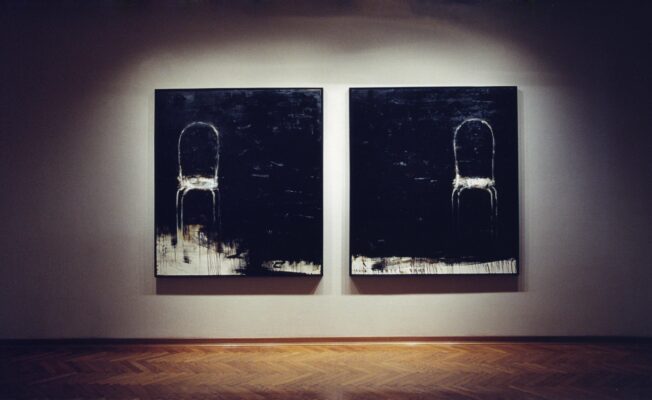 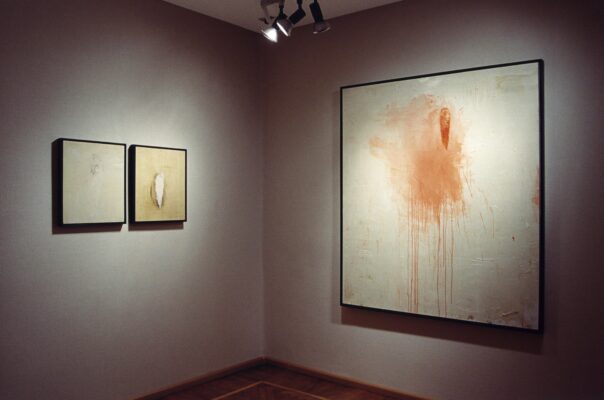 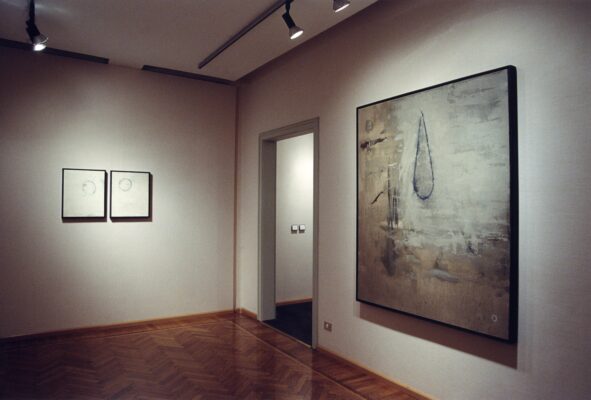 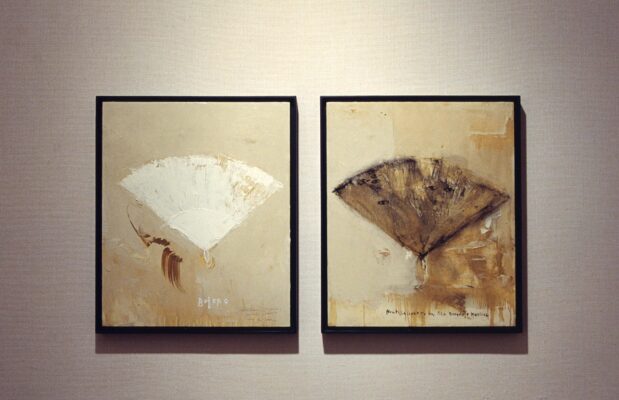 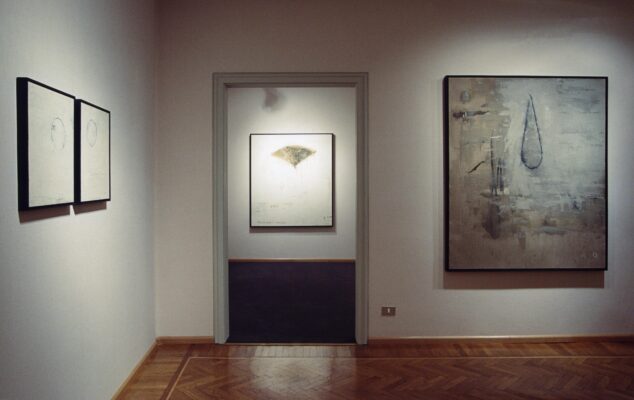 The evolution of Piero Pizzi Cannella’s painting, from the earliest works shown at the Tartaruga gallery in 1980 and at the Attico in 1984 until the extraordinary series of polyptychs on panel created between 2001 and 2002 and shown at the Castello Colonna in Genezzano, is always marked by both the tortured relationship between the material and the creative gesture, as well as by its incessant elaboration, its repetition and building up of symbols. These seem to arrive from far off, from classical culture, but are filtered until they become part of a secret interior world. The artist’s work has arrived at a further, almost inevitable, point and is seen in the works realized in 2003 and is distinguished by the need to free itself from any particular context, in this way synthesising a solitary, single iconic presence within the ‘imaginary circle’ in which each thing returns to become itself once more. It is in this context that we can see the painter’s obsession, something that gives life to both an intimate narrative and to collective memory.

But there is one possibility that Pizzi Cannella does not wish to deny himself, and this we find in his reiteration, even on the painting’s surface, of a mark that seems to be forever on hold and that generates nothing other than the image’s double, its complementary. This double process of duplication, one that involves both the element depicted and the space which defines it, is what was seen in the paintings chosen for the solo show at the Galleria dello Scudo, Verona, from 19 December 2003 until 28 February 2004.

So Doppia coppia, or Double Copy, is the title of an exhibition that unites large-scale paired paintings with other smaller ones in which we find the lonely appearance of the interrelated symbols typical of Pizzi Cannella: Chinese shadows, pearls, dried flowers, abandoned clothes, the ‘Pulcinelle’...

Couples and copies, linguistic games, the temptation to play on the names of the subjects, their representation and appearance as ‘double couples’, a Stravinsky-like game of cards, syncopated, perfect and, apparently, obvious and almost redundant. And yet there is always a further twist with this mysterious and deep artist. In order to create a series of suspended images, the paintings face themselves on the walls and yet present, as in Bolero or Gran ballo d’Oriente, nothing rhetorical. Through a painting that is at times sumptuous and at others turbulent, or reduced to its essentials and almost annulled, the symbols freely demonstrate their validity, their capacity to regenerate themselves and continue to exist as memory, light, colour, and space.

L’oro, Le perle: an objects is suspended in material and converses with its double, a real (not surreal) entertainment that at times becomes sinister and dramatic, as with the two canvases of I fiori secchi. If the multiplied eye of the self-portraits Bella coppia and Pulcinelle demonstrate the artist’s presence, in the couple set in the Grand Hotel it becomes even stronger through its negation. So the paintings interpret and interpret themselves: they narrate themselves and the imaginary world of Pizzi Cannella as in an intimate and suspended private diary that tells of a new personal mythology.

The exhibition is curated by Klaus Wolbert, director of the Institut Mathildenhöhe, Darmstadt and by Luca Massimo Barbero, Associate Curator of the Peggy Guggenheim Collection, Venice. The catalogue published for the occasion contains essays by them discussing the significance of the show and of the recurrent iconology of the artist’s paintings. It is supplemented by a contribution by Franco Rella, professor of aesthetics at the Istituto Universitario di Architettura, Venice, on the philosophical significance of the concepts of repetition and complementarity. Claudio Abate, who photographed the illustrations, also photographed the progress of the project in the artist’s studio.