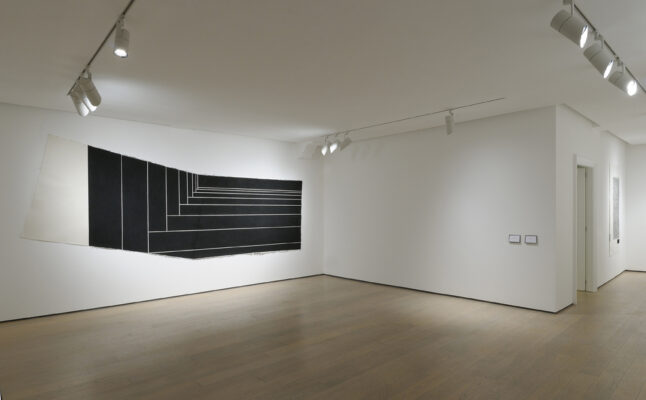 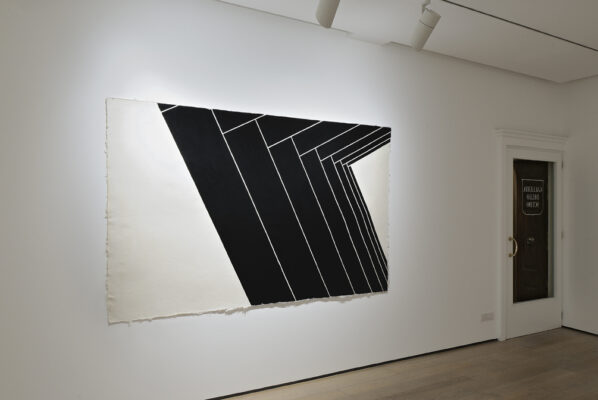 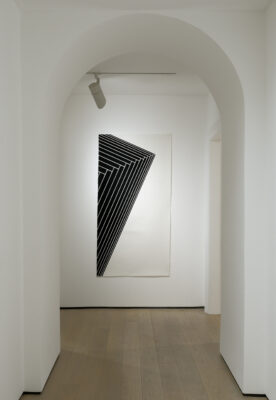 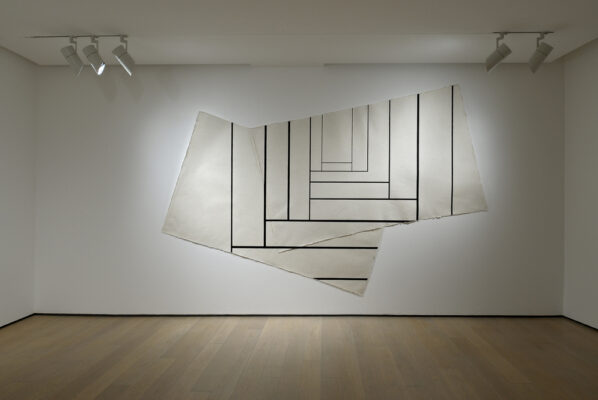 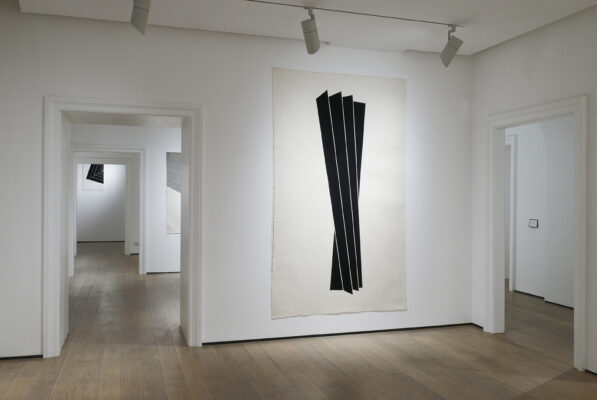 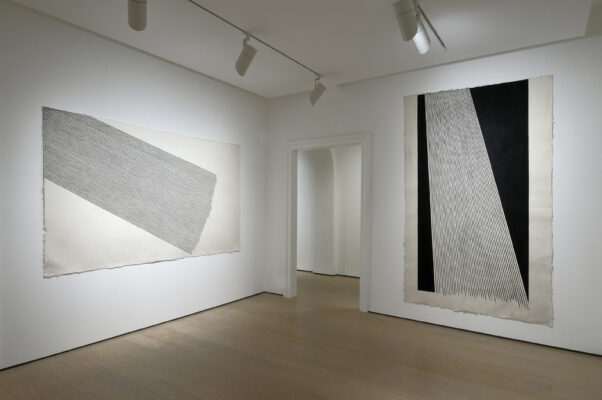 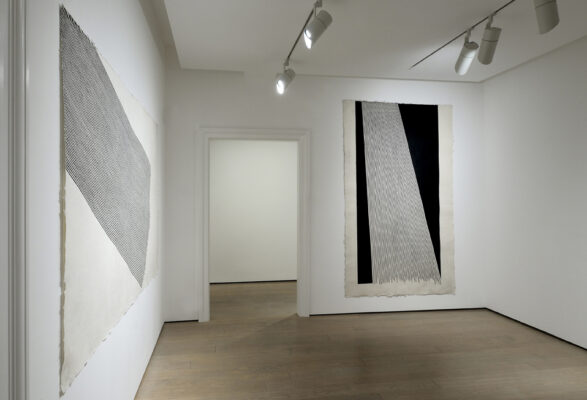 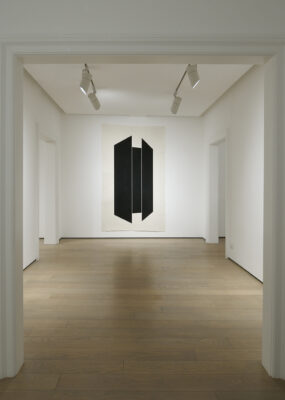 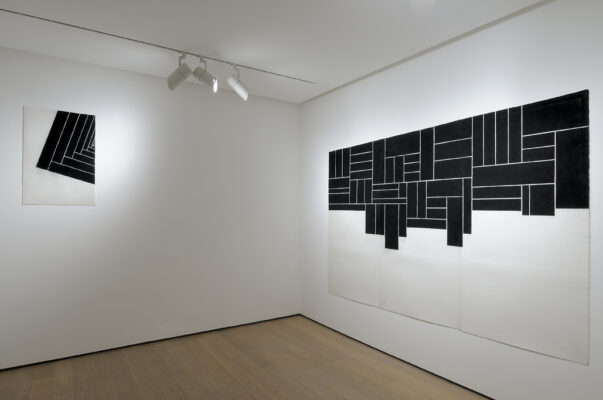 From the very beginning, the dialectic between sculpture and the plane that has arched over, flanked, and underpinned Nunzio's works has always been a distinguishing mark of his language. The installations from the early 1980s, made from plaster coloured by immersion, were conceived of for being placed on the wall because they were sculptures that "negate the force of gravity, even though not hiding their physical bulk", as Giuliano Briganti wrote in the catalogue for the solo show in the Attico gallery in 1984.

If even then the choice of materials aimed at giving the volumes a precise chromatic and luminous value, his preference for a three-dimensionality crushed by its Donatello-like matrix and his use of colour, aimed at making a new approach to overcoming the traditional relationship with painting, were to be seen constantly in later years. In 1986 Nunzio began to intervene on wood with wax, pitch, charcoal, pigments and lead, and the result was to be seen in the XLII Venice biennale in the Aperto 86 section, for which he was awarded the 2000 prize for the best artist.

Since then there have been various stages marking his wish to experiment with diverse techniques: he denied wood of its inherent attractiveness by burning it in order to give it a deep black colour; he chose lead both for its ductility and it strange ability to absorb and reflect light; he preferred rusted metal, as rust was the witness to metal's life and violates its original purity and perfection.

In the context of an art that over decades has produced a wide variety of results, drawing has never been considered only as a preliminary study or as something subordinate to sculpture but, in Nunzio's language, it has a basic role and an increasingly autonomous function. In the past there have only been two initiatives wholly devoted to this aspect of his art. The first was the solo show Confini held in the Galleria dell'Oca in Rome in 1991, accompanied by a catalogue with essays by Ersi Sortilopulos, and which grouped together sharp shapes alternated with other more evanescent ones, at times in charcoal and at others in pastel. The second was a travelling show in 2000 in the Italian culture institutes in Los Angeles, San Francisco, and Vancouver; here the large dimensions and the unusual juxtapositions of various shapes of paper created optical illusions, as though the forceful marks could swell and go beyond the limits of their white paper support.

As part of its unusual exhibition project devoted entirely to works on paper, Galleria dello Scudo mounted another show by Nunzio six years after his solo show Ombre, curated by Lea Vergine in the winter of 2005-2006; in the catalogue an interview by Hans Ulrich Obrist was also included. The exhibition was inaugurated on December 10, 2011, and consisted of works made a short time before in which, for the first time, the artist upset the traditional conception of drawing. If before he has often considered drawing as an alternative to sculpture, now it has become an integral part of it.

The show started with some works dating from 2005, chosen from those exhibited in the Galleria dello Scudo at the time, with the aim of tracing a continuous line between the experimentation of that period and what has come about since. In Trabeazione (2006), a work on paper almost three metres long, already exhibited in the American travelling show, the artist distributes the composition into a thick interweave recalling the structure of the stand on which he places his burnt wood installations. The position of the grate on top, ready to slide downwards, generates a sense of alienation as it constructs unusual perspectives: it is as though the weight of the drawing might alter its balance in space. In a work of two years before, the verticality of its marks seems to allude to a thicket of slender poles blackened by fire from above and united by a wide band that hints at the large black areas typical of his later work.

We then arrive at his most recent work which, at a stylistic level, shows a further development with respect to the past with its elimination of any kind of nuance and the greater sharpness of the outlines. The ample geometric forms underline a process of formal synthesis based on the dilation and densification of the fields. The image is shown nakedly, stripped of flesh, and concentrated into more compact nuclei; it is less based on lines or on the idea of vanishing points suggested by curved lines and the use of shaded areas.

Oblique surfaces, perspective leaks intended to ideally break through the walls, introduce us to a dimension centered on sequences of planes, oriented towards an indefinite place. Some works are conceived as three-dimensional shapes ready to develop in the space, in order to underline his wish to eliminate any kind of distance between sculpture and a two-dimensional surface. So to make a mark on the paper or to create an object can come together in a common action in which any kind of relationship with otherness is annulled. In this game of contrasts the drawing accepts three-dimensional forms and transforms them into elements that help the structure defined on the paper.

Japanese paper, then, is the real protagonist of the show; it is favoured by Nunzio for its particular tonal value and for its inherent appeal to vision and touch. Seen in succession along the walls of the gallery it will create a procession of monochrome scores, scanned by three-dimensional or etched shapes, and compose a symphony with impelling emphases. The papers accept and absorb the charcoal as though to make it become an integral part of itself; both of them have a common natural origin: charcoal derives from burnt wood, just as wood gives rise to paper. Wide fields of deep black open like windows onto an unknowable darkness, like the constant metaphor of strong contrasts (light-shade, black-white, day-night) on which Nunzio bases his art.