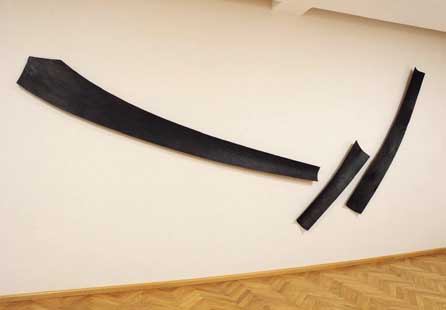 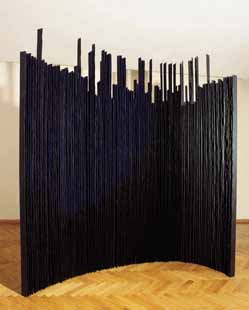 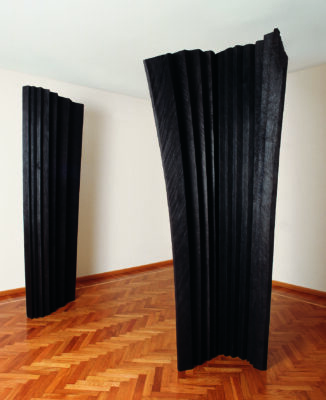 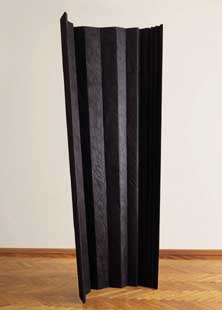 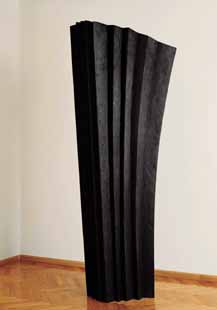 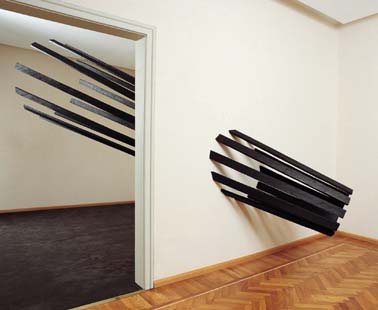 From his first shows in the 1980s in the Attico gallery, Rome, and the Annina Nosei gallery, New York, to his show from January to April 2005, MACRO, Rome, Nunzio’s work has always been marked both by its use of such assorted materials as plaster, wood, and lead, and by its relevance to the surrounding environment. His interests tend towards a basic and pared-down harmony through a synthesis of forms and the proportions of their parts. Furthermore, his work shows many narrative allusions to literature, history, or his personal life. Examples of all this are Odissea, one of the works shown in the Aperto ’86 section of the 42nd Venice Biennale and inspired by part of Dante’s Pugatorio, and Siskur, the title of a solo show in the Galleria dell’Oca, Rome in 2003, taken from a novel by Melville with the precise aim of alluding to the idea of an infinite journey, a metaphor for the artist’s experience when approaching new possibilities.

The paradoxical idea of the mysterious forces of experience in opposition to individual situations was the inspiration behind the installations in the show to be held in the Galleria dello Scudo, Verona, from December 10, 2005 to March 18, 2006. With a series of large-scale works Nunzio created an itinerary through the various rooms, articulated by a sequence of wooden ‘curtains’ and forms that alter our ideas of space when viewed against a series of expanded ideograms, two-dimensional works on paper, which underline the curvilinear theme constantly found in his work.

The exhibition opened with a large environmental piece in the form of forest of slender and completely black burnt wooden rods which hold themselves up without any apparent support, and created non-linear paths that could be entered and looked through. So the installation was formed in a completely different way from that of traditional frontal and lateral perspective: in itself it became an element that could be exploited in all its multiple spatial aspects. The whole piece was further characterised by the strict relationship between the lively movement of the surfaces and the dark depths of the black.

Fire-blackened wood was again the material used for constructing the work in the centre of the following room. Deeply involved in a dialogue with the surrounding architecture, the two dense and compact yet light and floating vertical structures, one with a curved form and the other almost spiral, had the precise aim of breaking up the room’s volumetric unity. Here the circular line became a metaphor for the force that a mark could express when delimiting an area of shadow that both attracts and imprisons the viewer.

And then there is the immense effectiveness of a mysterious element that crosses the wall from side to side as though to annul the separation of the two neighbouring spaces: this is a presence that could be interpreted in various ways. Thin and penetrating, these curved rods hung in the air visually imposed themselves in a daring balancing act: they crossed the surface abruptly, they were the protagonists of a disturbing scenography.

To close the show some large charcoal drawings on Japanese paper are hung on the walls. These too, as much as in his experiments with sculpture, demonstrated that Nunzio inevitably sublimated the linear elements that laid at the heart of his expression. So here again we found, ‘outsize’ and in infinite series, those subtle or at times exaggeratedly curved lines that marked out the rhythm of a continually evolving plastic research. It was in these lines that form revealed all its purity and dramatic tragedy.

The exhibition was curated by Lea Vergine, the author of fundamental essays on the historic avant-gardes and commissioner at the 1990 Venice Biennale. In the catalogue published for the occasion, besides an essay on the meaning of the works on show, there is also an interview with Hans Ulrich Obrist, curator of contemporary art at the Musée d’Art Moderne de la Ville de Paris and coordinator of the Stazione Utopia section of the 2003 Venice Biennale, which reveals the main threads running through Nunzio’s creative career. The volume also contains a detailed biographical outline by Daniela Lancioni and is illustrated by photographs by Claudio Abate interpreting the interaction of the works with the exhibition space.