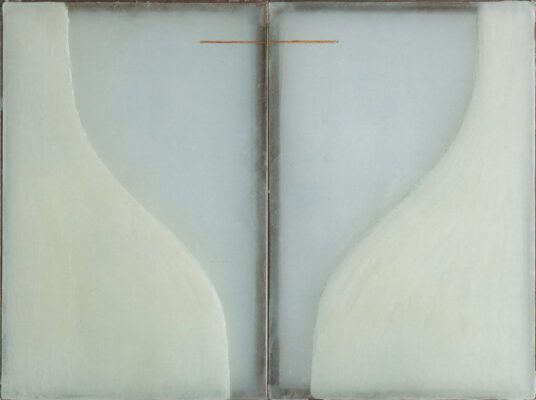 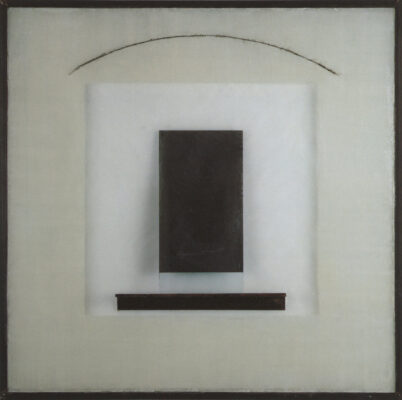 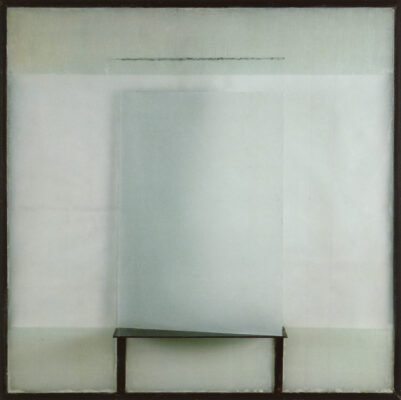 Iron, water, glass, carbon black, and wax were chosen by Gregorio Botta to create a group of works which were collected and exhibited as from 27 April, 2001 at Galleria dello Scudo, on the occasion of the solo exhibition organized in collaboration with Galleria Il Segno in Rome.

In the catalogue text, Fabrizio D’Amico highlights the elements of a language that constantly focuses on the oxymoron between sign and dream, between negritude and light, between the lightness of thought probing the image and the dull heaviness of the matter presenting it to the world. The “need to keep the image within a well-defined space boasting a strong semantic and visual concentration, and to insert a hiatus into the accelerated time of the artwork and its last epiphany”, the growing “need of pause and silence slowly brought about by that long (and antagonistic) reflection on gestural painting, with its consequent immediate emotional involvement into one’s own doing”, are the origin of a quest tending to a constant meditation on the complexity of perception.

“Warnings of this are perhaps the resorting to a constricted but steadfast sign on matter; and, through that sign, the succeeding in ‘composing’ the work more completely, reducing its risk of the unexpected, and leading it just before that form accepting no compromises against what does not flow from one’s own deep intention to come into the world – an intention being for ever untouchable and different from the blatant existence. Other warnings are those archetypal forms (the circle, the chalice...) into which the image collects itself, as if looking in them for a point of slow emergence of a submerged truth, which concerns our being more than our appearing.
Gregorio Botta’s world of forms appears exactly in this way: silent and cautious in its unveiling itself; muffled by that enveloping whiteness, as if it inhabited the amnion of a womb and drew nourishment from it; slow to reveal itself to the beholder, with its soft request for a long gaze on itself.
A gaze that discovers the enchantment at the end, and is not afraid of it.”
(Fabrizio D’Amico)