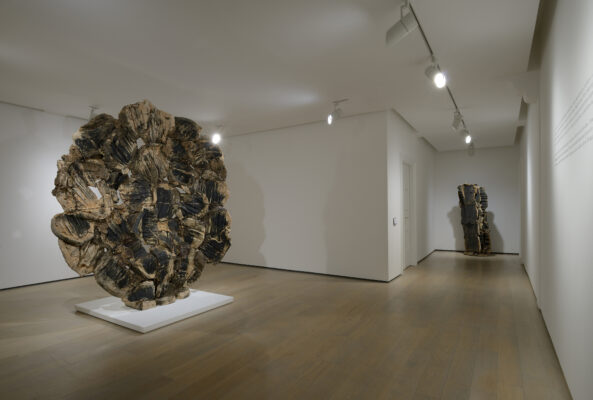 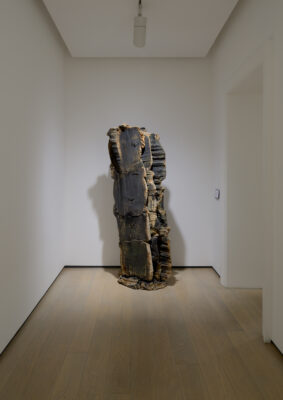 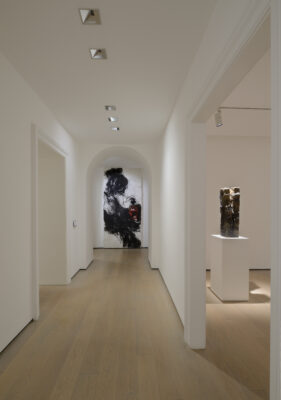 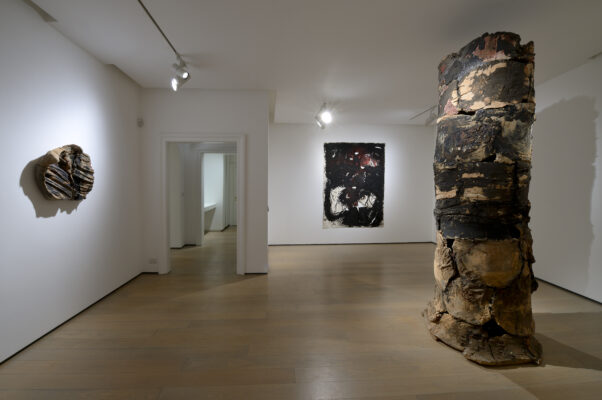 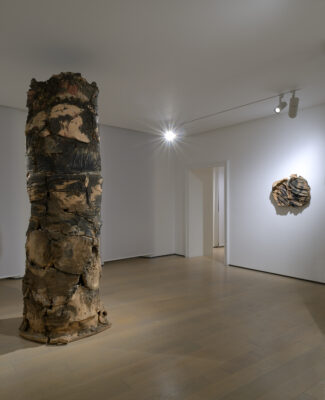 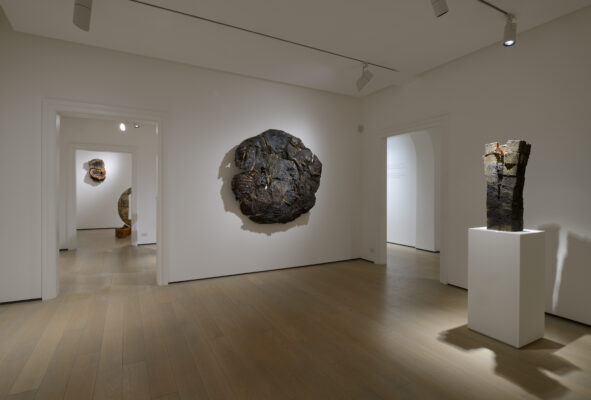 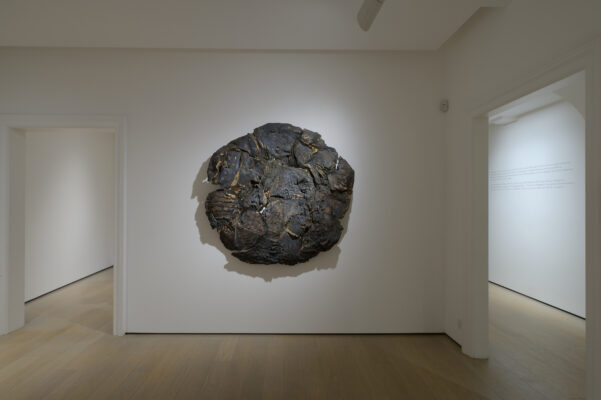 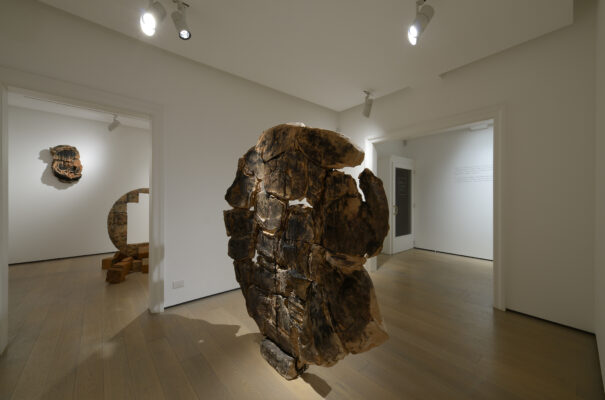 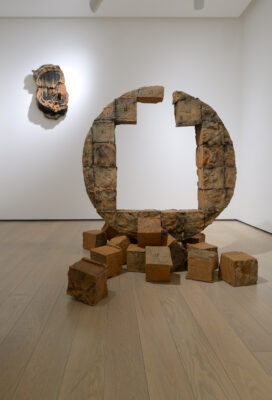 Over the past two years the need to return to modelling clay has led Giuseppe Spagnulo to renew his involvement with sculpture and to revisit his introduction to art when, very young, he made his first clay pieces in the kilns of his father, a master potter in Grottaglie, Puglia; this interest was to lead him to study various disciplines at the Faenza Ceramics Institute, a vital centre for experimenting with “high temperature” materials. Having moved to Milan in 1959 to study at the Brera Academy, he collaborated with his friend Nanni Valentini in making various works by Lucio Fontana, whose studio he frequented. In Milan, an extraordinary crossroads of contacts, he met Tancredi and Piero Manzoni and intensified his interest in the Informale movement which was to inspire much of his earliest work.

After his debut at the Salone Annunciata, Milan, in 1965, where a stoneware piece was exhibited side by side with a small wooden sculpture, various solo shows from 1968 to 1971 acted as the stepping stones to a series of exhibitions of international importance, such as his participation in the XXVI Venice Biennale in 1972, where he exhibited three imposing works in Corten steel, and in the 1986 edition.

In the 1970s and 1980s he exhibited widely abroad, in Korea, The Netherlands, Switzerland, and Germany. Of particular importance were his many shows in the most important museums in Germany: the Kunsthalle Bielefeld, 1978; the Nationalgalerie, Berlin, and the Kunstverein Braunschweig in 1981; the Städtische Galerie im Lenbachhaus, Munich, in the following year; the Lehmbruck Museum, Duisburg, and the Kunstverein, Hamburg, in 1985; the Württembergischer Kunstverein, Stuttgart, and the Museum Ostwall, Dortmund, in 1991. At the beginning of the 1990s he became professor of sculpture at the Stuttgart fine arts academy, a result of the great success of his work. Of particular importance was the show E se venisse un colpo di vento? curated by Luca Massimo Barbero at the Peggy Guggenheim Collection, Venice, in 2005, which also hosted in the Nasher Sculpture Garden the important steel sculpture Torri, 1999, which was all of five meters high.
The Galleria dello Scudo is presenting the artist's first solo exhibition wholly devoted to terracotta works in order to document this surprising new phase of his sculpture which explicitly reworks forms, often on a large-scale, to reveal both his need for sculptural concreteness and physicality, and that for ancient manual ability.

The exhibition starts with Rosa dei venti, 2012, a sculptural prodigy that reveals a tempest of natural forces such as to overthrow and disperse the constructive elements of the circular body, reduced in this manner to an uneasy and solitary ruin burnt by fire. Terramoto and Turris, both from 2012, show, in opposition to the horizontality of the two-dimensional Paesaggi, 1976, created as clay and brick floor surfaces, the accentuated vertical extension of certain large-scale terracotta works dating from 2012-2014; at times they have an apparently unstable balance and seem almost at breaking point, at others there is a precarious re-composition of the fragments of archaic buildings.

So in fact Terramoto, even while revealing the immanence of an earthquake within a mass subjected to the artist’s feelings, rises up by subtracting itself from natural laws and solidly holding together the variously painted blocks that compose it. In Turris, the terracotta’s acceptance of the tiniest imprint by the artist’s hand is something quite different from the resistance and heaviness of industrial metals that have been repeatedly forged and it lends itself well to a figurative aim that refers back to archetypal forms with an obvious symbolic recognisability and a strong emotive impact. The work, broken and sadly evocative of the tragic events of history, is therefore recomposed thanks to the sculptor’s hands which act with impetus and angry aggression in a dramatic and continuous contest with the material. These are two works have tortured surfaces and are radically different from the sequential planes that connote the homage to Boccioni Quelli che vanno, created two years later.

Circularity, in the sense of the need to delimit the space in which the artist acts, in other words the “landscape”, is announced in Fine d’Io, 2013: lumps of pressed and flattened clay are raked by orthogonal lines which would dig even deeper were they not held back by the painful stitching of the iron wire. Then again, Panorama scheletrico del mondo, 2014, an menacing construction enclosed in a circle that hardly manages to keep its concavity intact, brutally refers back to the clash between the excavated elements in a fatal dialectic between centrifugal and centripetal forces. The wounds return, something the oxides highlight with their chromatic strength. Also from 2014 is Trasfigurazione, a wall piece in which the artist tends to shift from an earthly situation to one of the spirit. The material clumps, the forms seem to lose their distinguishing features, the colour of the engobed terracotta becomes uniform in a dark prediction of death. On the other hand the three contemporaneous elements that make up Da I volti del dio Penn, inspired by a divinity of Celtic-Ligurian origins, allude to a “natural” noumenon, one with human resemblances impressed on the stone.

The sculptures are flanked by works on paper that are painted or, rather, "sculpted" by volcanic sands, iron oxides and coal which signify impetus, pulsations, thunderbolts ready to lacerate violated, perforated, and torn surfaces in which is evident just how Spagnulo's creative action has reached "the intensity of a panicked and shamanic liturgy" (Bruno Corà). In the large paper works exhibited, the dynamic sense of the composition is increased by iconographic aims without any particular explicit figuration, but not for this any less eloquent or less lacking a strong organizational pathos. This is the case of Ombra dell’amore - il lutto and Icaro del 2013-2014: the paper support, due to its high percentage of cotton and the density of impastos based on natural fibers, does not always resist the impact of the artist's pictorial-sculptural action.

The heir to the kind of plasticity that, following Medardo Rosso, had such authoritative interpreters as Arturo Martini, Lucio Fontana, Leoncillo and Fausto Melotti, today Spagnulo’s sculpture is considered as one of the most convincing lessons in sculpture on the international scene. This statement conveys why, among famous artists of the past forty years, such as the Europeans Cragg, Gormley and Baselitz, and the Americans Morris and Serra, his status is that of an emblematic figure.

For this occasion, the Galleria dello Scudo published a catalogue in three languages, introduced by an essay by Bruno Corà, the show’s curator and author of a monograph devoted to the artist, published by Gli Ori in 2013. Furthermore, it contains an interview by Luca Massimo Barbero who, after undertaking a new analysis of the work, has broadened his previous ideas about it. The volume also contains photographs by Claudio Abate, a first-hand observer of the contemporary art world.