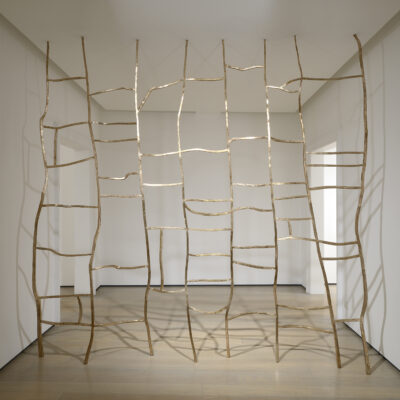 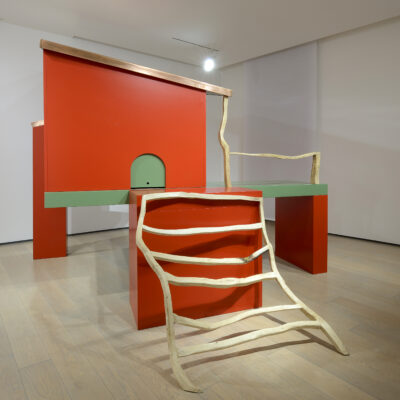 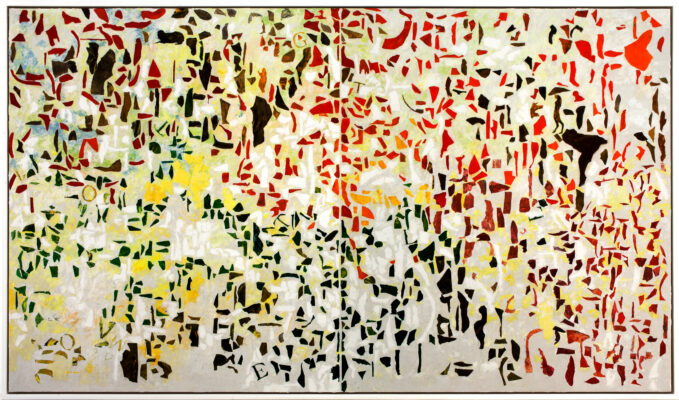 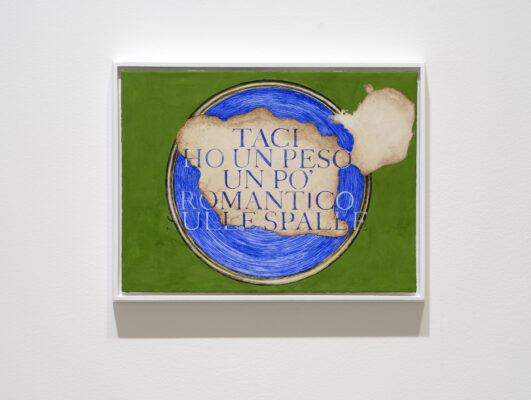 From the very beginning, Giuseppe Gallo’s art has shown a variety of expressions that hover between the use of antique techniques and an experimentation with new procedures, between conceptual ideas and a love of tradition. His art language, extremely refined in its cultural references and in the creation of a symbolic code that stimulates a comparison with the past, derives from the juxtaposition of geometrical forms, often organised into complex structures and inspired, for their multiple meanings, by a universe of references ranging from music to literature, philosophy, and science.

Present in the shows devoted to the early 1980s and held in various northern European museums, and after his solo shows in New York at the Gian Enzo Sperone gallery in 1986 and 1987, Gallo embarked on a long series of important exhibitions, among them the XLIV Venice Biennale in 1990. With San Nicola da Tolentino, 1996, his work became part of the permanent collection of the Museum Moderner Kinst Stiftung Ludwig in Vienna.

In 2000 he was invited to Palazzo delle Esposizioni in Rome for the show Trialogo, together with Anthony Gormley and David Hammons. Four years later he exhibited a group of large-scale sculptures for his show Percorso amoroso, at the Galleria Civica d’Arte Moderna in Spoleto, and in April 2005 he held a solo show, Mito-rito-sito, at the Galleria dello Scudo in Verona.

This was to be followed by his works being seen in various events of international importance, among them the Second Beijing Biennale in the autumn of 2005; an anthological show, curated by Danilo Eccher at MACRO, Rome, in the winter of 2007-2008; this was then transferred to the museums in Mannheim and Saint-Étienne. His work figured in various group shows in 2009 and 2010, such as Italia Contemporanea. Officina San Lorenzo, MART, Rovereto; Keep your seat: stai al tuo posto, Galleria d’Arte Moderna, Turin; Una notte ho provato a uccidere un sogno. Da allora non mi sono più svegliato was the title of an ample overview of the various aspects of his art held at the Castello Normanno-Svevo in Costanza from 31 October 2015.

Gallo is returning to exhibit at the Galleria dello Scudo with his solo show Il teatro assurdo del viandante (The Wayfarer’s Theatre of the Absurd), in programme for 2 December 2017. The title alludes to the artist’s wish to stage a play that offers wayfarers, in other words the viewers, a walk through a selection of works that include large-scale paintings, bronze sculptures and installations, juxtaposed without any logical sequence.

The pictures consist of fragments taken from images that cannot be reconstructed, and of which the artist does not permit us to find any mnemonic trace; on the contrary, he himself, considering the process employed, is no longer able to recuperate the original forms. As in archaeology, this is a question of putting back together the shards though it is impossible to regain the unity of the find.

The show’s central work is Loggia dei sogni, which, together with other works such as Il libro del filosofo e la luce, consists of a myriad multicoloured elements that are shown in an order reflecting the long processes of nature. With a daring inversion of the archaeological procedure of recomposing an object, the background was made at the end of the work. It is the result of the union of four traditional techniques: oil paint, watercolour, tempera, and fresco.

The model seems to be a musical construction. What resulted from a deflagration was later removed to make visible the light background, alternated with the colour as a result of a process of subtraction. In the paintings the images are juxtaposed against each other; they almost seem to cut themselves out by themselves, taking on diverse forms. There are also some letters that emerge, but it is not possible to make out their sense. In one case there appears the phrase “Gallo è matto” (Gallo is mad), reduced to fragments scattered around the painting. At first the forms were black silhouettes on glass; they were then painted in oils and then detached and cut up. The procedure is long and complex.

One of the gallery’s rooms is divided in two by a bronze site-specific installation conceived of as a free-standing membrane, the reworking of an idea dating from 2015 when the original work was made from broken branches and tree trunks. Quinto quarto, 2017, marks both an aperture and a closure, and designs a transparent space. It is a further moment for thought about the relationship between mankind and nature as a result of the knowledge that “the nature of things does not have its own rigidity but finds its balance within the dominant criterion of its creations”. In another room is a full-size “chicken coop” (with the misleading title of Galleria - Gallery). This work is also an ironic allusion to the artist’s surname – Gallo means “rooster”. The rungs of this chicken coop are never the same, just as in the case of the legs of his preceding chairs/sculptures.

The shapes, each completely different from the others, derive from branches found in nature. The roofs are made of wood, copper or the lead sheets of his friend Nunzio. In this show there are not only pictures. Besides a singular series of “cannonballs”- in which the recurrent elements are those typical of his iconographic repertoire, such as philosophy, the centre-vortex, dromedaries, and hands – the artist has planned a group of five bronze self-portraits, each different from the others. Their title is Ho la testa confusissima, 2016, and they are an answer to one of the aims of the exhibition’s programme, in other words that of creating accidents. In fact the artist has in his studio a device, thanks to which, by pulling a rope, a shelf opens and from it falls a fresh clay head that is deformed on impact, and is then cast in bronze.

It is a quite unconventional way of dealing with the component of unpredictability as well as that of the loss of identity. And then there is Taci. Ho un peso un po’ romantico sulle spalle, the title of another recently made, deformed self-portrait, one with a strong iconic value and in which the face seems to have been crushed by a violent punch. This too was first made in clay, then in wax, and finally in bronze. If the starting point of many works on show was the irony of the absurd game that artist plays with himself, in his work we also perceive that he has let himself go back to memories of his childhood, something that emerges, not only from his technique, but also from his feeling for restoration. In fact his father was a restorer who involved his son in his work and who repeatedly said, “Art is logic”.

Gallo has reminisced that, “I passed my childhood restoring frescoes; I had the materials at home. I have painted since I was three”. In fact he learnt at home, as a child, that art is also the outcome of a rational process; despite this he has aimed at offering us a theatre of the absurd. The wayfarer the title refers to, in fact, is not only the viewer, invited to undertake an apparently unregulated journey around painting and nature, but also the artist, a wayfarer who follows the same path together with us. 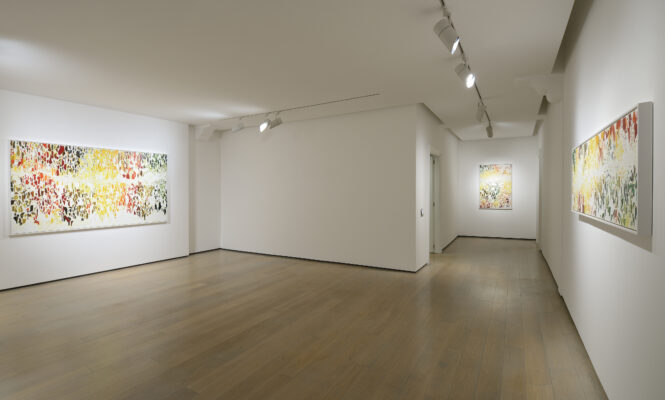 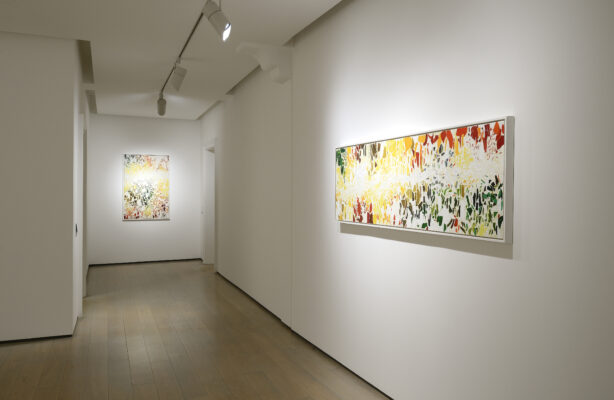 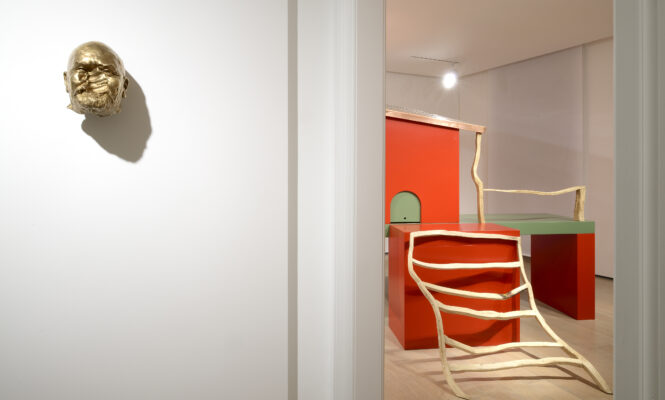 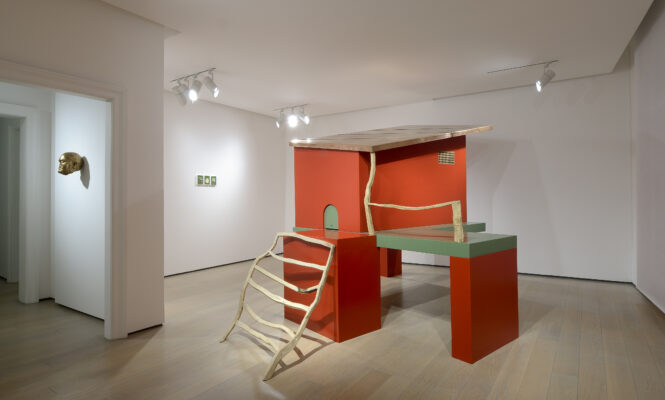 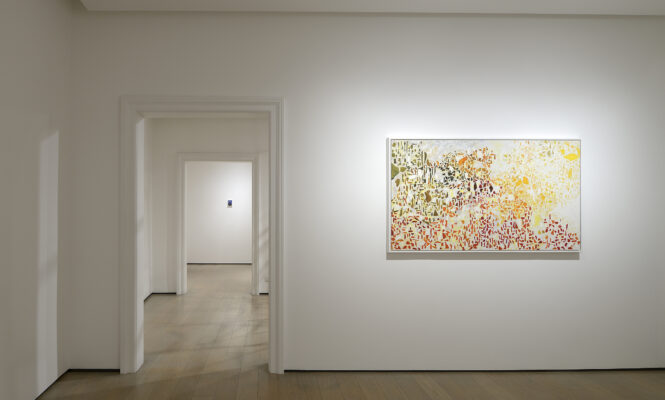 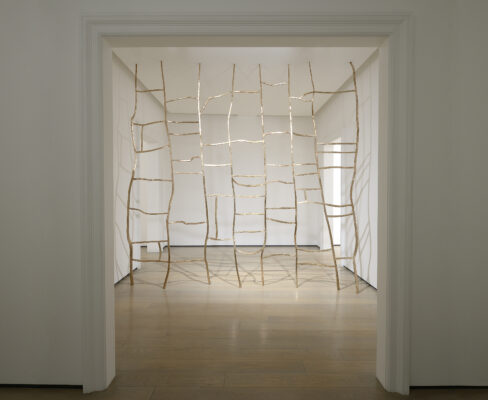