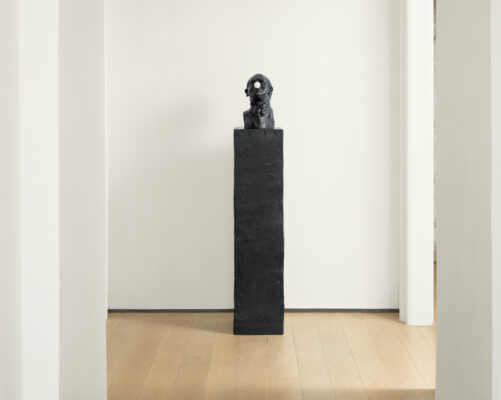 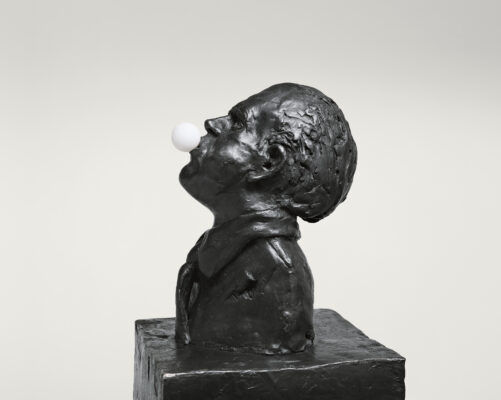 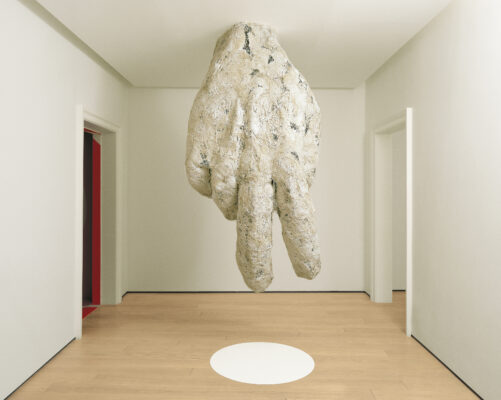 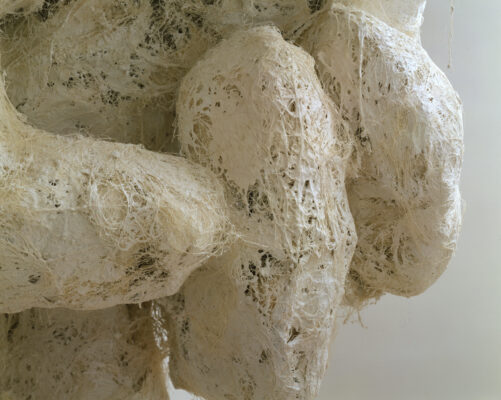 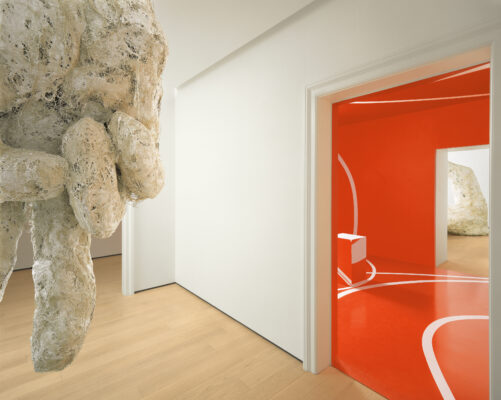 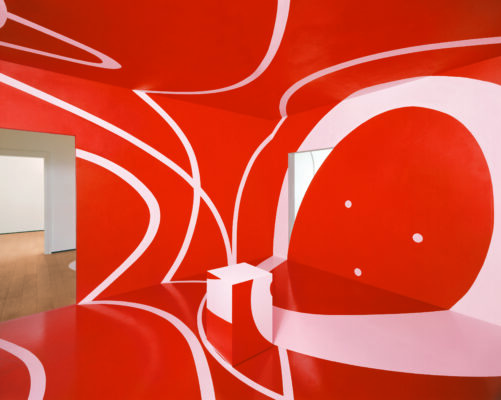 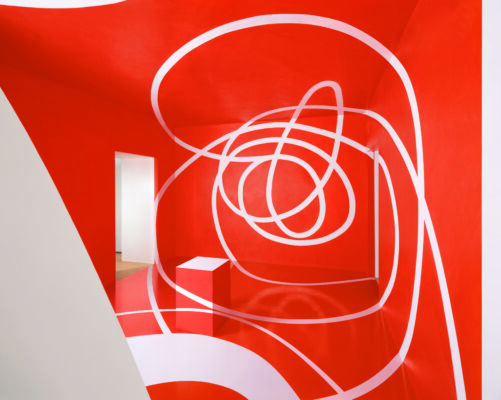 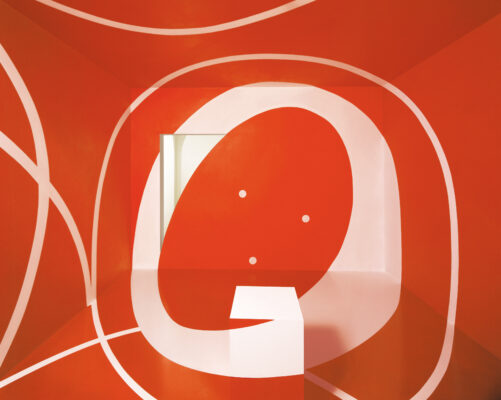 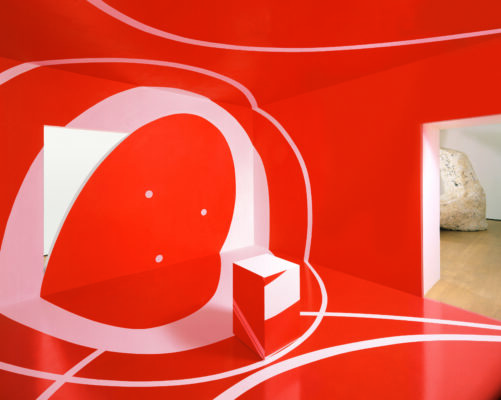 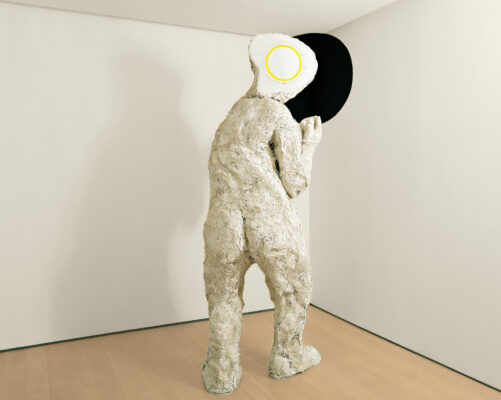 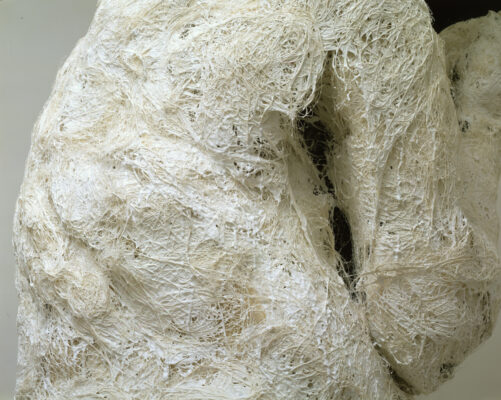 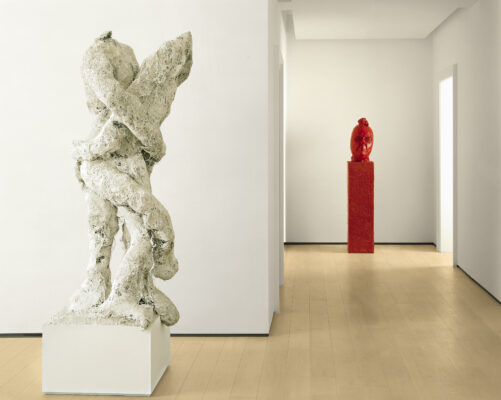 Thoughts about space and the possibility of creating an unusual dialogue between painting and sculpture have been at the heart of various recent monumental installations by Gianni Dessì; in them the sense of alienation generated by the apparently irreconcilable proportions of the material and the setting offers the imagination new possibilities. An exceptional example of this was the huge installation in the show devoted to the San Lorenzo group in the French Academy in Villa Medici, Rome, in 2006, where the crouching figure of Atlas created an effect of unexpected compression within the space. A further example was to be seen in the exhibition Italia contemporanea – Officina San Lorenzo held in MART, Rovereto, in the summer of 2009 and in which the paint created a singular splitting-effect through the use of geometrical forms that seemed to migrate from the sculpture onto the wall.

With his solo show to be held in the Galleria dello Scudo in Verona from 12 December 2009 to 28 February 2010, Dessì will once again tackle this theme and will create a project with a precise philosophical value: it will elaborate, in metaphorical terms, a personal idea of artistic experience. The exhibition is subdivided into two main sections specifically created for the occasion: large-scale sculptures placed in the various rooms but forming a single intervention and, side by side with them, smaller works to round off the whole plan of the show.

The itinerary begins with a bronze self-portrait, a lost-wax cast showing the artist in the act of blowing upwards. His breath is represented by a small, light, luminous, and almost impalpable sphere which contrasts with the course, rough, dark material: the game of creation is enclosed in a simple, even banal, gesture; this is the élan vital with which the artist gives a form to his thoughts and their inclination to perfection.

The visitor then enters the next three rooms, each a part of a single context defined by the artist with the term Confini or boundaries. In the first are two superimposed feet which are striking for their unexpectedly gigantic size; they are constructed from metal structures covered with a mixture of agave fibre and resin. Like the other large-scale sculptures in the show, they have white bodies given light and shade by the cavities and the traces of the working process which the artist has deliberately left on view. The material is frayed, not because of some expressionistic aim, but from a desire for economy. On the top of the wall is a large painted circle which forms the apex of a triangle within which the whole composition is locked, as though to suggest the idea that, along our road towards knowledge, we cannot set aside our experience of reality and so we must keep our feet on the ground.

We then arrive in the central part of the show: the "camera picta" or painted room; it is completely painted red and crossed by long white elliptical lines that imprint the walls with a dizzying circularity. This is the place for seeing, where the space is redrawn from a twin point of view: one inside the room itself, and the other outside it, thus creating a reversal of perspective and offering the viewer a plurality of vision. It is an ideal representation of the head, animated from within by its “box” enclosing all the vitality of thought. For the artist this "camera picta" represents the renewal of a genre he has employed since the ‘80s, one in which, with a scenographic approach, painting is closely knit to space, deforming it and redefining its internal perspectives.

There follows the alienating impact of a huge hand about to draw a dot on the floor: guided by the mind, the hand is thus the means by which artistic creation comes about. Hands, feet, and the head, the latter conceived of as having seeing as its main function: these are the three corporeal boundaries humanity has to cross in order to give form to its thoughts.

In the fourth room Piccolo piccolo, or Tiny, appears. In it the gigantic figure of a child looms up almost to the ceiling; it peeps out as though to mock having been caught in the act of turning towards the person looking at it; it is the only sculpture in the whole show to appear as a human presence in its entirety.

Having passed through the peculiarly innocent wonder of childhood, typical of an intuitive rather than rational approach to the world, we arrive at the complete work which is organised into a series of three-dimensional pieces placed on the floor and the walls and which is, at last, on a human scale: Intreccio, Tangle, 2007, which represents a man and woman clinging together; some bronze bas-reliefs hung all round the room; and, finally, Trama a vista, Visible Network, a bright red wax bust with its eyes masked by metal netting. This is a veiled invitation to the visitor to enlarge and widen his own interpretative network, a network that can be distinguished from the blurred mass of agave and resin threads that go to make up the sculpture: so it is this tangle which sustains the images and confers a body on them in one go.

Gianni Dessì was born in Rome in 1955. From the beginning his paintings do not appear forced within the boundaries of the canvas, but extend beyond, on the walls that welcome them as if to emphasize the intent to expand towards a "other" space, beyond the canonical limits of the pictorial surface.
↣ More info 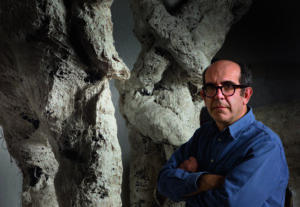