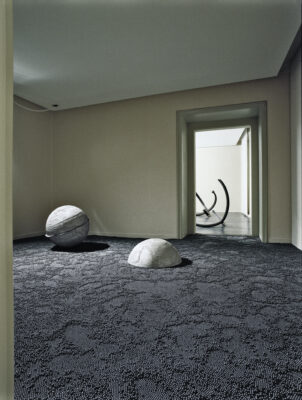 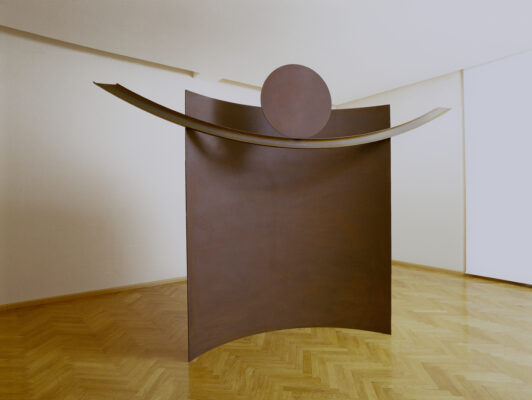 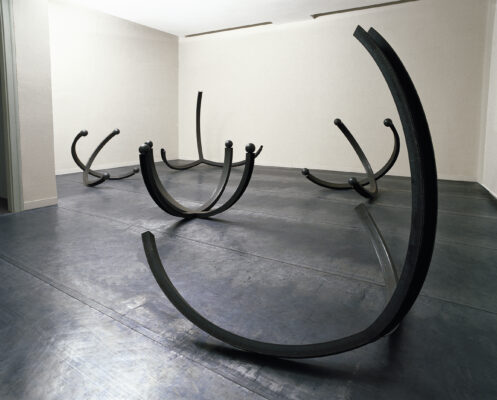 Sculptures made from recycled materials in 1961; performances at the Tartaruga and Attico galleries in Rome between 1967 and 1971; the anti-rhetorical groups of works related to each other through time-space at the solo show in the 1972 Venice Biennale; and Pensare il pensiero and Rifarsi at the Iolas gallery, Milan, in 1973, two actions aimed at sublimating both the mind’s invisible energy and the creative act: all these, together with his experiments with video and photography, show the multiple interests of Eliseo Mattiacci in the first twenty years of his career. But it was in 1982 that the artist took a decisive step towards a representation in which the dialectic between space and the cosmos began to predominate, and this was to become his major aim allowing him to attive at a new abstraction, at an “aerial, heavenly” idea, to use the words of Giuliano Briganti, the synthesis of “balances, weights, gravity, and space” demonstrating his highly personal way of making material weightless.

Cosmic space is always Mattiacci’s central theme. For a long time he has searched for this space, interpreted and continually examined it, as was seen in the imposing exhibition at the Mercati di Traiano in Rome in the summer of 2001. This basic theme also was at the heart of the works chosen for the artist’s solo show at the Galleria dello Scudo, Verona, from December 19, 2002 until February 22, 2003. Some large-size sculptures were also placed in the garden of the Museo di Castelvecchio.

Capta spazio is the title of the recent pieces presented to the public for the first time on the occasion of this Verona exhibition. They are based on modules each derived from the joining of two steel rails culminating at their extremities in a small sphere. They are placed randomly over the floor which is covered in lead, and they seem to attract the impulses arriving from the surrounding environment. “They are strange forms, both archetypal and childlike, fossils and playful, terrible yet kind. They are, perhaps, anchors stolen from some secret seabed, or the skeletons of giant spiders, the conquerors of other planets’” as Fabrizio D’Amico has written in his catalogue essay. There is a proliferation of forms which looks towards the heavens, “almost as though they were waiting for a thunderbolt in order to harness its energy”.

The formal message of Mattiacci’s work is conveyed with rigorous simplicity and immediacy: there is the sense of a balance of forces that presents us with surprising stillness and a magical suspension. This is seen in certain works in the show, such as Equilibrio (2001-2002), a huge iron disc held vertically by a potent magnet, made immaculate and fresh as the dawn by its ancient geometry. Then there is Collisione, created some years earlier, which is a kind of gong or suspended star, run through by a long, slender thread-like lance, the same as that found in Centrare il bersaglio (2002), in which it hits the disc in the centre to underline emblematically the artist’s interest in its pure form.

La mia idea del cosmo, an installation conceived in 2001, occupies a whole room and seems an immense universe from which emerge from a myriad of atoms, mysterious planetary forms: aluminium spheres are placed on a lead floor which in turn is covered by a thick mat of little lead balls. The energy implicit in this apparent immobility derives from the capricious instability of the material that leads the elements of the universe to become dense or to thin out according to the perennial movement of variable forms that are always on the point of becoming fixed. It is a random, unorganised entity; it is the metamorphosis of insignificant industrial products into the poetry of a star-studded sky. The installation has distant roots in Mattiacci’s imaginary, not too different from the diurnal and nocturnal matrix that is the foundation of many other works of his. So it is in syntony with Porta del Sole and Porta della Luna (1993) now shown in their most recent form. With these works the artist means to demonstrate how every creative process takes place within the coordinates of night and day, in a constant metamorphosis that dissolves in the gradual mutation of one season into the next.

It is in this context that we are again proposing to the public Carro solare del Montefeltro (1986), an all-important reference point for interpreting Mattiacci’s dialogue with the past. This large installation owes its formal balance and its innovative appearance to the artist’s regenerative mnemonic ability: it is a direct reference to Piero della Francesca’s triumphal allegory at the back of his portrait of Federico di Montefeltro. On iron rails the artist has placed, slightly at a tangent, a cart with two large disc-shaped bodies joined by an axis that curves upwards and supports a third, smaller disc.

The exhibition was curated by Veit Loers, director of the Städtisches Museum Abteiberg in Mönchengladbach, and by Fabrizio D’Amico, author of many fundamental contributions to research into Mattiacci’s work. The catalogue contains essays by both and will be centred on the meaning of the works on show. There is also a furfher text by Daniela Lancioni with biographical and bibliographical notes. Claudio Abate, who photographed the works illustrating the catalogue, has interpreted them through their interaction with the artist and their setting. 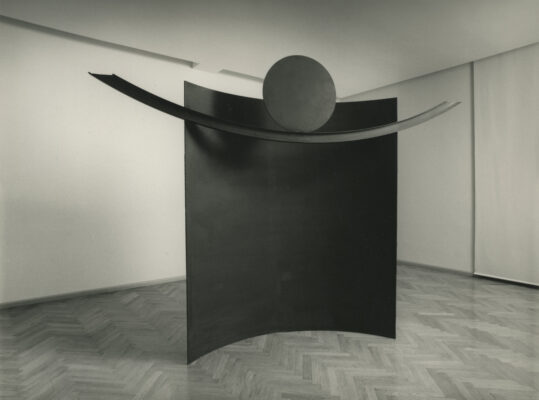 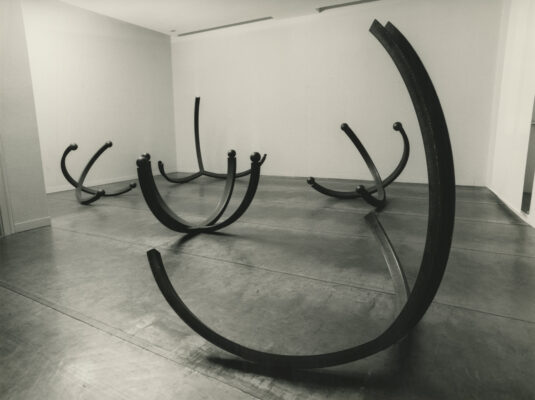 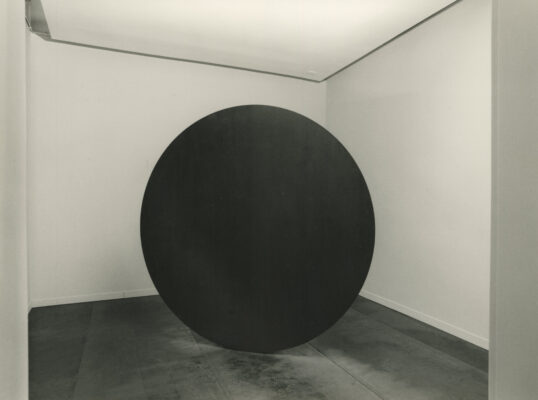 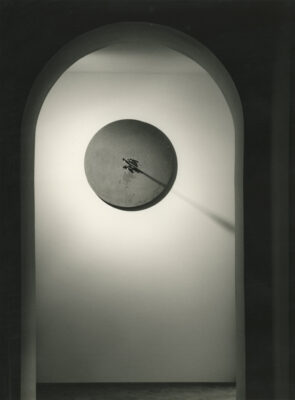 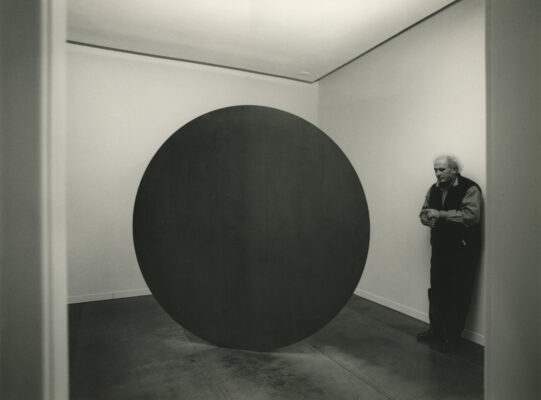 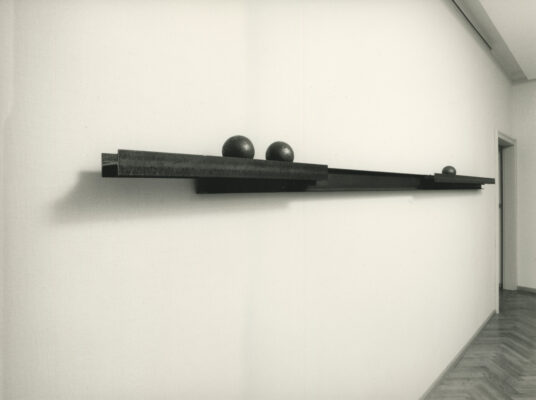 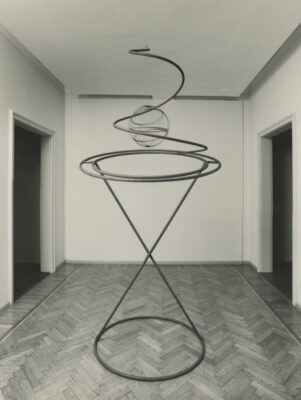 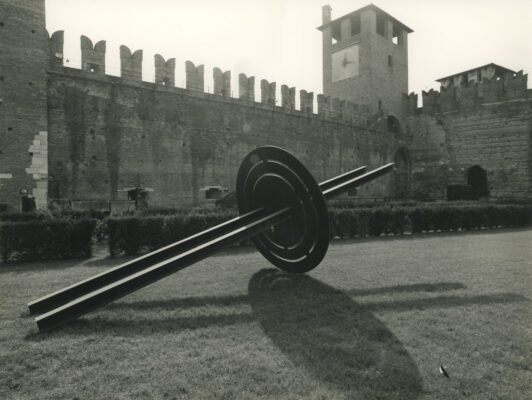 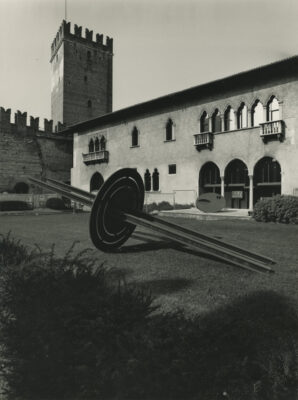 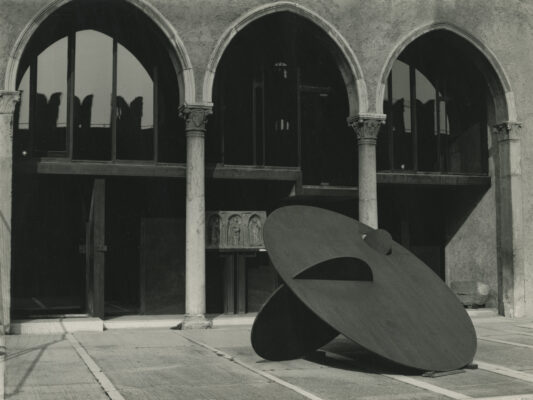 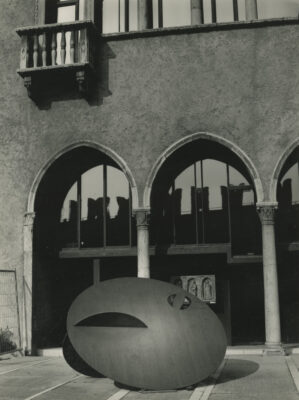