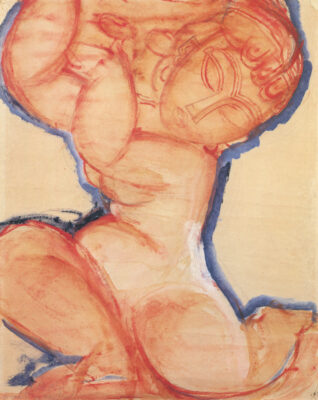 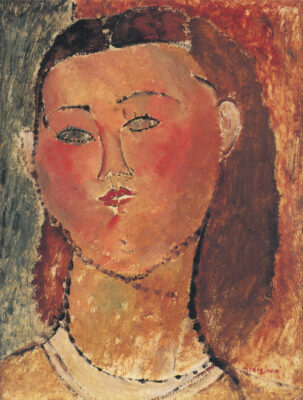 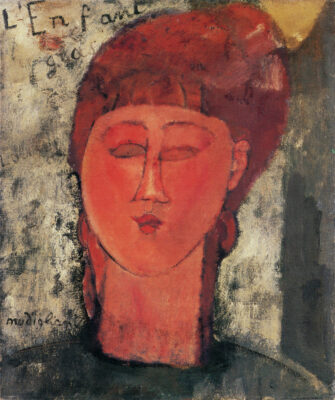 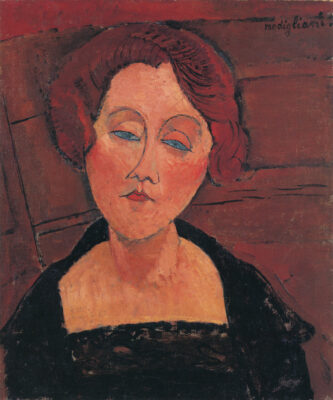 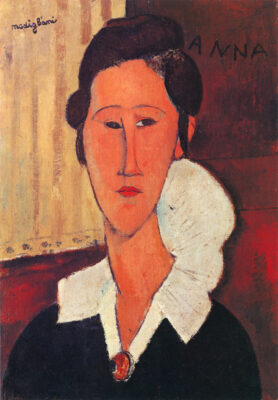 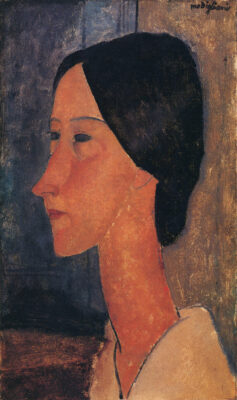 Between November 1984 and January 1985, Galleria dello Scudo celebrated the centenary of Amedeo Modigliani’s birth with an exhibition organized under the patronage of Regione del Veneto and the Municipality of Verona. The exhibition presented a group of sixty-six works by the artist, coming from public and private collections and including eleven paintings, all boasting an extensive and documented literature. Furthermore, it showed a selection of works on paper – pencil, watercolour and tempera – in order to highlight the different aspects of his creative path and offer new elements by reconstructing the network of “Italian meetings” which mark his biographical story between Livorno, Venice and subsequently Paris, from the years of his training to the period of more mature artistic commitment.

The exhibition was opened by Ritratto di Mario Buggelli (1907), dedicated to the painter Anselmo Bucci, followed by numerous nude studies and “Caryatids Heads” (1910–1911) owned by Paul Alexandre, friend and first patron of Modigliani. Of great importance is Cariatide rosa con bordo blu (1913), a watercolour initially owned by Mariska Diederich, later entered the Sydney G. Biddle Collection, Philadelphia, and since 1956 exhibited in the most important monographic shows. Cariatide (1914), the large-sized tempera entering Cesare Tosi Collection, epitomizes how archaic sculpture has had a fundamental influence in defining the artist’s repertoire so far.

The show was completed by intense pencil portraits by Donato Frisia, Béatrice Hastings, Moïse Kisling, Max Jacob, and by Zborowski himself, made from 1916; the watercolour Odalisca blu (1917) with the figure in an attitude of sweet abandon, able to thrill the cubist painter Albert Gleizes; many female nude drawings (1917–1918). At the end, the iconic Ritratto di Hanka Zborowska, di profilo (1919), which was exhibited for the first time in winter 1929 at De Hauke and Co., New York.

The project proposed an unprecedented survey, deepening Modigliani’s relations with exponents of the artistic and cultural landscape of the period, both in Italy and France. The Livorno milieu, the setting of the painter’s beginnings, is documented through the work by his friends Gino Romiti, Oscar Ghiglia and Llewelyn Lloyd. The stay in Venice since 1903 offered him new food for thought and the opportunity to meet Boccioni, Martini and Gino Rossi.

The move to Paris in winter 1906 was fundamental for the maturation of a language that would prove to be completely unique. The French capital was then in full swing, giving new spurs, offering opportunities for comparison not only with painters and sculptors from all over Europe, but also with Italians attracted by the many opportunities offered by a lively cultural climate. Among these was Lorenzo Viani, present in the exhibition with La parigina (1911), a work on cardboard permeated with that spleen, or pain of living, ready to emerge in Modigliani too; moreover, Ubaldo Oppi, whose Notturno (1913) referred to the Parisian artistic environment of the avant-gardes; Carlo Carrà, to whom we owed the overcoming of the more orthodox futurism with the search for “concrete forms” clearly evident in Caffè di sobborgo (1914); Gino Severini, who with Café Américain (1915) offered a personal vision of the nightlife of the café-concerts; finally Medardo Rosso, on display with La portinaia (1883), and Ecce puer (1906) loaned by Galleria Civica d’Arte Moderna in Verona, to underline how much his research was a canonical standard for any experimentation in the plastic field.

The exhibition was accompanied by a rich array of photos, documents and writings, some of which are unpublished, offering a broad and articulated vision of the artist’s complex personality.

The catalogue published for the occasion was edited by Osvaldo Patani, author of numerous publications on Modigliani and of the exhibition held at Rotonda della Besana, Milan in 1982. It also featured contributions by Maurizio Fagiolo dell’Arco and Guido Perocco, the latter among the authors of the entries documenting the works of the compared Italian artists, beside Massimo Carrà, Daniela Fonti, Claudia Gian Ferrari, Marco Lorandi, Licisco Magagnato and Giuliano Matteucci. 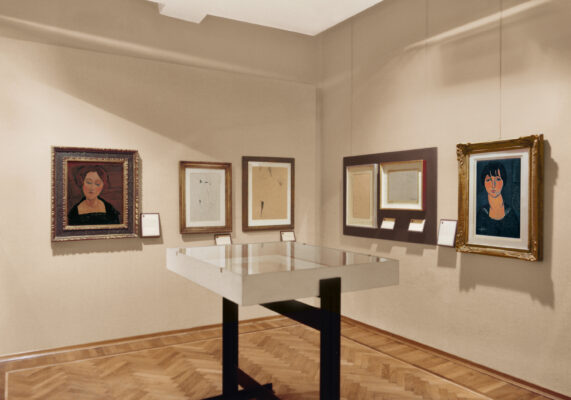 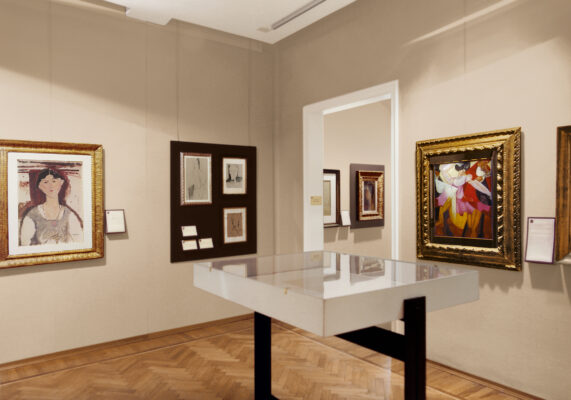 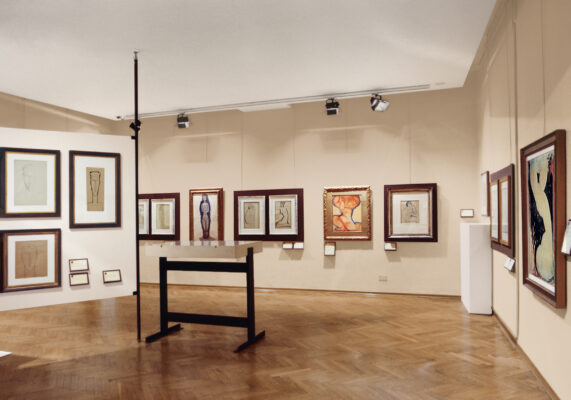 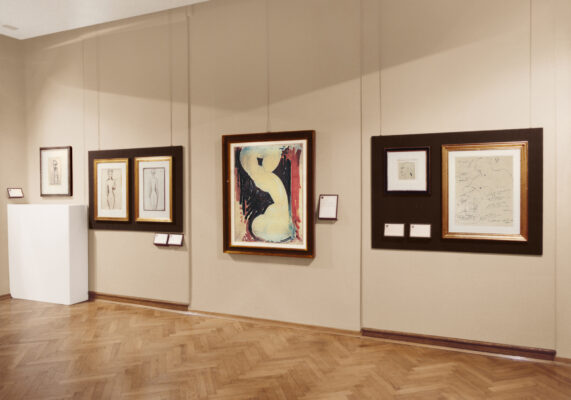 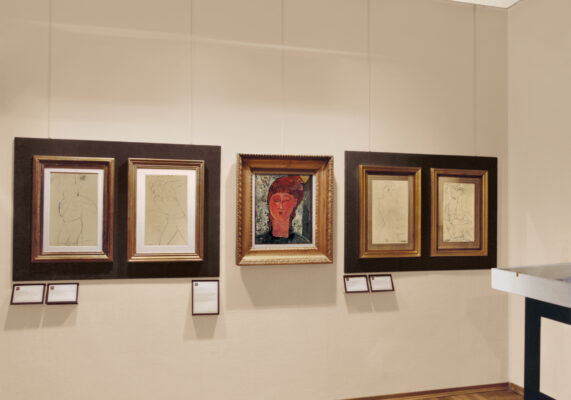 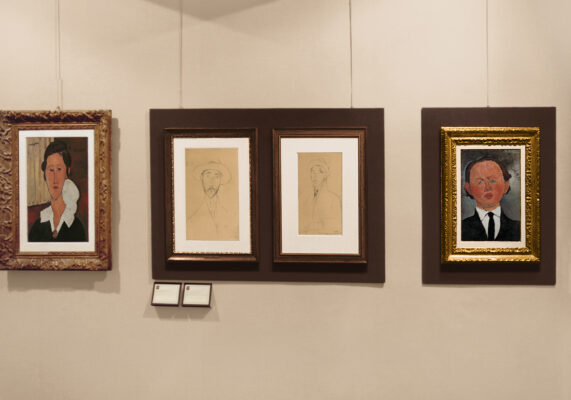 At the request of Assessorato alla Cultura della Provincia di Torino, and with the intervention of Soprintendenza ai Beni Ambientali e Architettonici del Piemonte, after the period at Galleria dello Scudo the exhibition was moved to Turin, Palazzo Reale, from March 2 to April 14, 1985. A second edition of the catalogue, unchanged, was published on this occasion.

Amedeo Modigliani was born in Livorno in 1884. In 1898 he began to attend the painting school of Guglielmo Micheli, as a pupil of Fattori, in Livorno after he dropped out of high school because of a lung disease which, due to a relapse, led him in 1901 to recover in southern Italy. In 1902 he enrolled in the Academy of Fine Arts in Florence, attending the lessons of Fattori at the Free School of Nude and sharing the study with Oscar Ghiglia, with whom he participated in the artistic life of the city with Costetti, Gemignani, Lloyd, Sacchetti, Andreotti; in 1903 he moved to the Venice Academy.
↣ More info 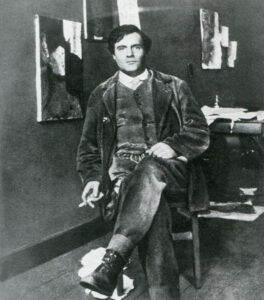