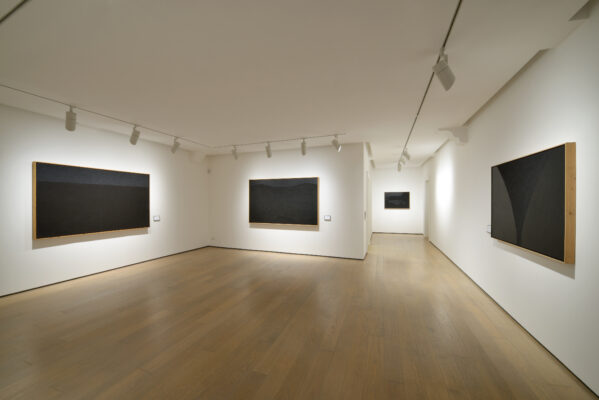 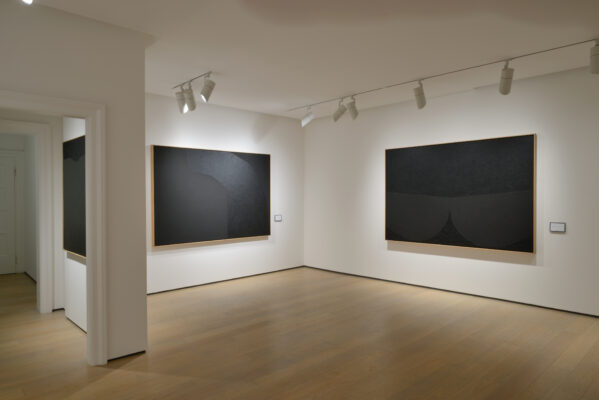 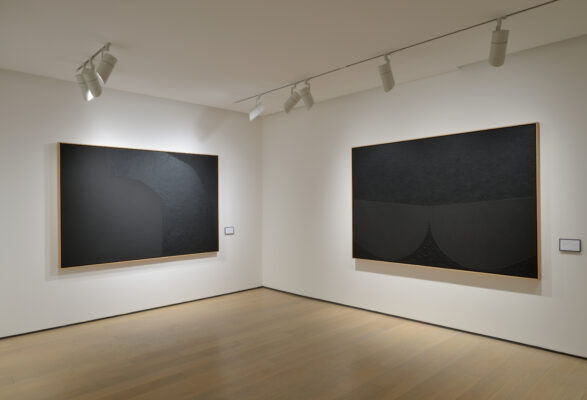 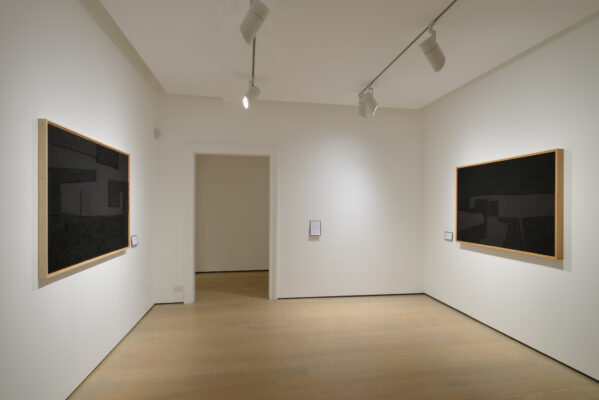 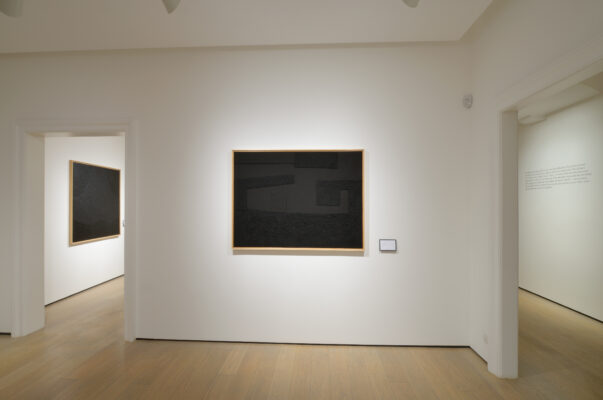 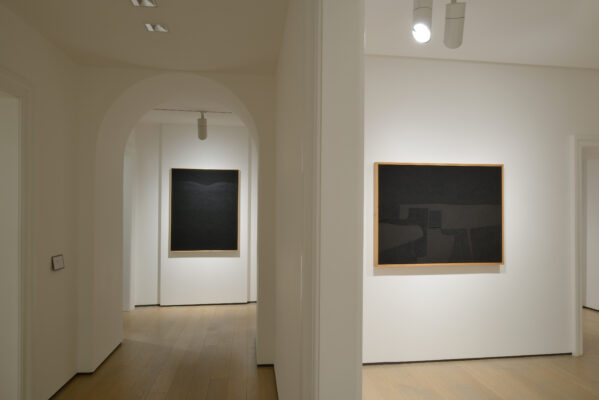 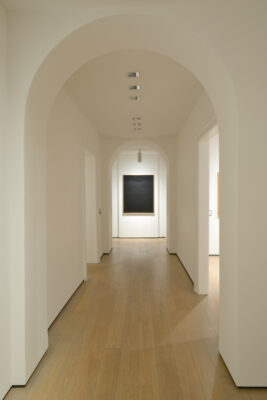 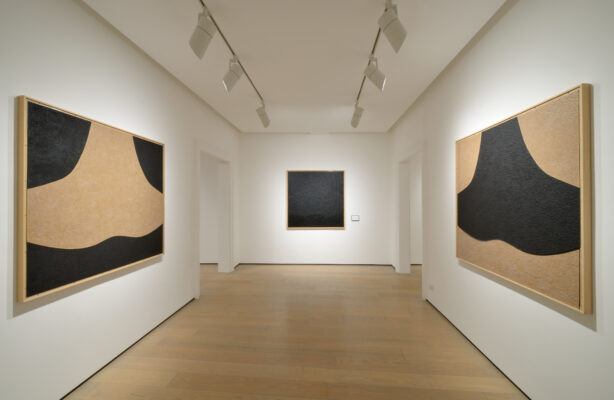 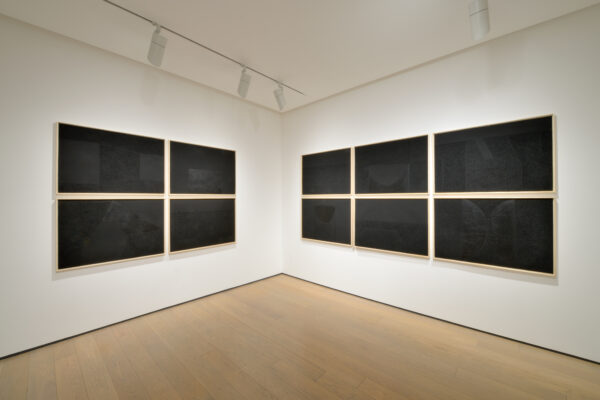 Opera al nero, Work in Black, is the title of the exhibition dedicated to Alberto Burri held at Galleria dello Scudo since December 15, 2012, and it purposely refers to the original French title of Marguerite Yourcenar's literary masterpiece. In this there is an explicit reference to ancient alchemical treatises and it illustrates the procedure for the separation and dissolution of matter into its various formative components. The concept of "nigredo" or "blackness", not without allusions to Dürer's Melencolia I, alludes to the breakdown of a body through the decomposing action of fire and the successive process of re-composition.

Thus "Work in Black" is even more relevant to Burri's work in which it becomes a symbol of creation, the secret place for work where we find the "mystery beyond appearance" is harboured, as Guido Ballo said in 1988 with reference to the Annottarsi 2 series exhibited in the XLIII Venice biennale and now seen in part in this show in Verona. The Cellotex, which the artist had previously used as a support for other compositions, now became the absolute protagonist: the "work" in fact. In a process of gradually stripping down his expressive means, Burri arrived at its basic element, at the material that had always been considered as being at the service of something else. This was no different to what had occurred in other of his more iconic experiments, such as his Sacchi, Legni or Plastiche combuste: material continued to be at the heart of the artist's work and was able to establish by itself the rules and unusual balances within it.

Even in its apparent nakedness, which in fact is minimal, Burri's work reveals an insistent use of monochrome: more than black, it is "his" black, one that never repeats itself; it changes form, dimension, and creates a space inside the picture. Even when it seems unchangeable in its fixity, the image is anyway susceptible to variations based on minimal differences, in such a way as to impose itself each time as a unique and unrepeatable event. With his Cellotex works, Burri arrives at a supremely "classical" state and rediscovers a structural rigour which had never previously reached such great refinement.

Through a selection of 30 works created over twenty years, from 1972 to 1992, and divided into six sections, the show offers a view of the works representing the artist's language after the 1950s and 1960s when he was already the subject of international critical consideration.

Nero (c. 1972) opened the exhibition. It is still sober in its way of structuring space, with a tall, undulated horizontal line introducing a lighter note into a structure that never stiffens into a rigorously geometrical form. Together with a further three works, dating from 1974 to 1982, this marks the first section, which has the significant title La notte della pittura, The Night of Painting, and reveals the basic theme of the show: the “Work in Black”. “No other modern work is so deeply identified by 'black' than that of Burri” Bruno Corà states in the catalogue.

There then follow four of the sixteen elements that make up the Monotex series (1986), which was seen for the first time a year later in the large exhibition in the “La Sapienza” university in Rome. These works, square and based on the same compositional module, document the artist's aim of bringing to completion his inquiries into a possible double chromatic relationship: that between cellotex’s natural ochre on ochre and the black on black obtained by the application of acrylic paint.

Black becomes dominant again in the two large Cellotex from the Annottarsi 2 series (1987). The sixteen paintings of this series, after their debut in the room devoted to Burri in the XLIII Venice Biennale in 1988, were then transferred, from November to December 1988, to the Murray and Isabella Rayburn Foundation, New York, and struck a chord with the American public for this very use of black, considered as the artist's typical stylistic feature. As in many other cases, the dimension now tend to the monumental and shows how Burri wanted to leave behind the confines of painting in order to act imperiously with space by establishing a more or less measured alternation of subjects and various formats.

The Assegai series is represented here by Nero A n. 1 and Nero A n. 4 (c. 1987). These were seen in the solo show in the Galleria Eva Menzio in Turin from 1988 to 1989. Now having arrived at an extreme synthesis, the painting eliminates the variety of, and care for, details, and becomes a formal and chromatic absolute in itself. Assegai is a word that alludes to Africa where Burri had been sent during the war as a medical officer. Bruno Corà has written, "In the absence of any specific information for relating it to Burri's poetic aims, our only referent is that of a weapon, widespread in the Palaeolithic, with a short handle and a stone blade, similar to a lance but smaller".

In the fifth section are hung some paintings created by Burri between 1987 and 1992 during his stay in his studio-home in Los Angeles. Their formal layouts seem similar to those of the first works made between 1948 and 1950 and were also recurrent in later works, thus demonstrating that the black Cellotex works of the final period reveal a constant spatial progress that spanned the whole of his career.

The complete Mixoblack series (1990), closes the exhibition itinerary. These are ten works created with a particular chalcographic process, mixography, with which embossed paper can be made with the aid of a sand- and marble-dust matrix on cellotex.

Skira has published a detailed catalogue for the exhibition with an introduction by Maurizio Calvesi; an essay by Bruno Corà, the show's curator; and an analysis of the works on show also written by him. There then follow an inquiry by Rita Olivieri into the critical response to the Cellotex works; an essay by Vittorio Rubiu; a detailed biography of the artist edited by Aldo Iori; a reconstruction of the relationship between Burri and the Venice biennale elaborated by Laura Lorenzoni; and an interview between Manuela De Leonardis and Aurelio Amendola, the photographer with whom Burri had a long friendship. A section edited by Elena Dalla Costa reconstructs the contents of exhibitions by Burri between 1977 and 2007 in which the Cellotex pieces were the only works on show; the aim is to provide both a record and a detailed investigation of the stages in which the concept and presentation to the public of the individual series were organized. Alberto Burri was born in Città di Castello, near Perugia, in 1915. He graduated in Medicine in 1940 and, enlisted as a medical officer, participated in war operations in North Africa. Taken prisoner in 1943 in Tunisia by the British, he was later sent to the American concentration camp in Hereford, Texas, where he began painting. Returning to Italy, in 1946 he settled in Rome to devote himself to painting. In 1947 it was the first solo exhibition at the Gallery La Margherita di Gaspero del Corso and Irene Brin, with works still of a figurative nature. In his second solo exhibition: Bianchi e Catrami, also at the Galleria La Margherita, in May 1948, proposes abstract works for the first time. He then begins to process the first Catrami. In 1949 he made SZ1, the first printed Sacco.
↣ More info 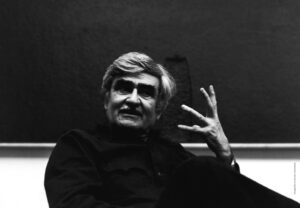