Salvatore Scarpitta was born in New York in 1919 into a family of artists: his father was a sculptor who emigrated from Sicily and his mother was a Polish-Russian actress. He passed his childhood in Los Angeles California, where he assiduously visited the Legion Ascot Speedway and fell in love with automobile racing. At 17 years old he moved to Rome to study at the Accademia di Belle Arti. He served in the United States Navy during World War II as a “Monuments Man”, finding, preserving, and cataloguing art stolen by the Nazis. After the war, Scarpitta remained in Rome and worked in his studio in Via Margutta.

During his time in Rome he was represented by the Galleria La Tartaruga and he spent time with Burri, Dorazio, Fontana, Turcato, and Consagra. After the “bandage” works, in which strips of canvas were dipped in plastic substances to stretch them as far as possible, Scarpitta began to use elastic strips drenched in glue to better render the idea of tension over the whole surface of the work.

In 1958, Leo Castelli saw his work and asked him to move to New York and join his gallery. Scarpitta’s first solo show was in January 1959 in the Castelli Gallery, New York, where he was to show various times until 1999. In the United States he associated with such great artists of the period as de Kooning, Guston, Marca-Relli, Rothko, and Smith, as well as such critics as Harold Rosenberg. In 1961 in the Dwan Gallery, Los Angeles, he exhibited a number of works from the X Frames series – panels or canvases covered and wrapped in canvas, and from the surface of which emerge diagonal crosses like relief veining – in which we can see a search for a minimal and rigorous style.

In the Galleria dell’ Ariete, Milan, in 1964 he presented for the first time in Italy works incorporating exhaust pipes, safety belts, and small pieces of junk: in other words elements from the world of car racing. It was this enthusiasm that was to lead him a year later to use old iron and handmade components to make Rajo Jack, one of his first facsimiles of a racing car. Towards the end of the 1960s Scarpitta experimented with the use of new technologies and unusual materials and objects as sleds. Besides his exhibitions in the United States, Scarpitta often returned to Italy where he held shows in numerous galleries; he was present in the Venice Biennale in 1952, 1956, and 1958, and in 1993 he was invited to hold a solo show there. Scarpitta’s works are part of the permanent collections in various museum among which MoMA and Whitney Museum of American Art, New York; Albright-Knox Art Gallery, Buffalo; Hirshhorn Museum and Sculpture Garden, Washington. He died in 2007, in New York. 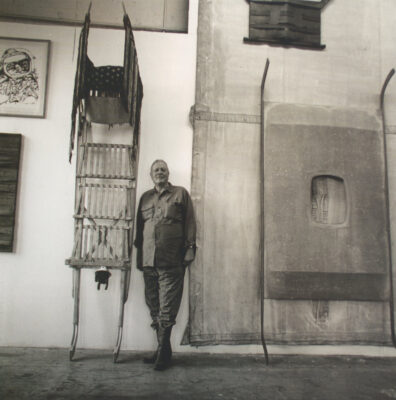