Renato Guttuso was born in Bagheria, in the province of Palermo, in 1912. Son of an agronomist with liberal ideas, from his earliest youth he loved painting which he explored by frequenting in his hometown the studio of the naturalist painter Domenico Quattrociocchi and the workshop of the decorator Emilio Murdolo. In Palermo, instead, where he studied at high school, he frequented the studio of the painter Pippo Rizzo. He made his debut in 1928 at the Sicilian Mostra Sindacale. After his high school diploma in the classics, 1930, he enrolled at the law faculty but soon abandoned it in order to devote himself completely to painting.

At just over twenty years of age he was accepted at the Rome Quadriennale in 1931, where he would return to exhibit in 1935 and 1937. In 1932 he took part in the exhibition “Gruppo dei pittori siciliani” at the Galleria del Milione in Milan. In the following years he lived in Rome, Sicily, and Milan, making friendships with painters, including Birolli, Cagli, De Grada, Fazzini, Franchina, Mafai, Melli and Sassu. He definitely settled in Rome where he shared a studio with Colacicchi and Scialoja, which was to become an important meeting point for artists. In 1938 he held his first solo show at the Galleria della Cometa in Rome, and in the following year, in Milan, he participated together with the Roman group at the Corrente show.

In 1942 he showed Crocifissione at the Premio Bergamo, a strikingly expressionist painting that aroused great hostility and that preludes the realism with strong and dramatic tones that would connote his painting in the post-war period; two years later he took part in the Resistance. In 1945 Guttuso went to France where he became friends with Picasso and, in the following year, he began to take part in numerous shows abroad. He took part in the " Fronte nuovo delle arti", in an attempt to highlight the society’s ethical and political problems, besides the purely artistic aims, presenting himself together with the other representatives of the group at the XXIV Venice Biennale in 1948. In this period he realized the series of works devoted to the Terni steelworks and the sulphur mines in Sicily. A communist party militant, he was still interested in social themes and remained a convinced supporter of realism, even after the break-up of the “Fronte” in March 1950. 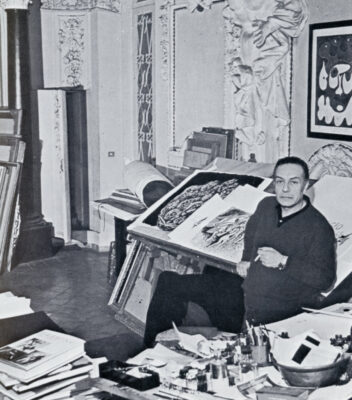 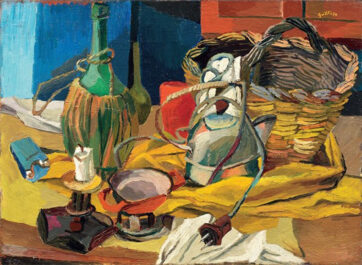 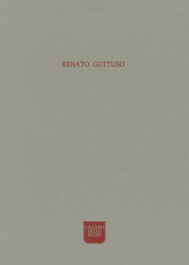