Pietro Consagra was born in Mazara del Vallo in the province of Trapani, Sicily, in 1920. After a sojourning in Paris between 1946-1947, where he visited the studios of Brancusi, Laurens, Hartung and Adam (Pevsner, who never invited artists to his studio, received Consagra at home), he began to create abstract sculptures. In 1948 he was present at the Salon des Réalités Nouvelles at Palais des Beaux Arts.

In 1954 his Colloqui were presented at the Venice Biennale, where he returned to exhibit with a one-man section in 1958. In the same year other one-man shows aere presented: at the Palais des Beaux Arts, Brussels (1958); the World House Gallery, New York (1958), and at the Galerie de France, Paris (1959). Consagra was awarded the International Grand Prize for Sculpture at the Venice Biennale in 1960. He then began to be invited to participate in the most important international exhibitions, among which Documenta Kassel (1959, 1964), and Modern Sculpture from The Joseph H. Hirshhorn Collection at the Solomon Guggenheim Museum, New York (1962).

In 1964 he passed through a period of rethinking during which he turned, with great intensity, to working with enamel paint on hardboard, such as Piani appesi, Piani sospesi (1964-1965) and Ferri trasparenti (1965-1966). This is a sculpture with a profile that is no longer quadrangular but curvilinear and with thinning planes that fragment and expand. After his one-man exhibition entirely dedicated to colored irons at the Museum Boymans-van Beuningen in Rotterdam, in 1967 he went to America, where he stayed for a year during which he taught at the School of Arts in Minneapolis. He also received an invitation for the exhibition Sculpture from Twenty Countries at the Solomon R. Guggenheim Museum in New York.

In his section at the Venice Biennale in 1972 he presented a work titled Trama, an imposing installation of seven bi-frontal wooden sculptures which must be considered among the most significant examples of Consagra’s new aims. In the same period the artist discovered the fascination of “stones” and the infinite polychromatic variations of nature. Then he tried his hand at architectural design: among the various interventions is the Meeting realized in 1983 in Gibellina, a two-faced building bordered by large glass surfaces that interact with the surrounding landscape. In 1987 he started the series of Pianeti, works whose surface, painted in bright colors, consists of sheets of wood superimposed with short thick scraps. In December 1993 the permanent room dedicated to the thirty-two works donated by the artist was inaugurated at the Galleria Nazionale d’Arte Moderna e Contemporanea in Rome.

In the numerous awards obtained during his long artistic career, we point out the gold medal as Benemerito della Cultura e dell'Arte received in 2001 by the President of the Republic Carlo Azeglio Ciampi. In addition to sculptor, Consagra was the author of essays and writings by art critics, including La necessità della scultura (1952), La città frontale and Vita mia (1980), the latter of an autobiographical book.
In 1995 he settled in Milan, italy, where he died on July 16, 2005 at the age of 85. 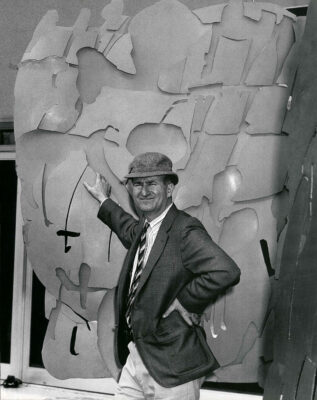 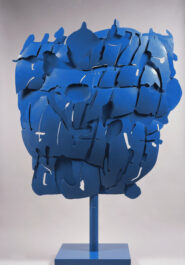