Piero Manzoni, born in Soncino in 1933 in an aristocratic family, attended the faculties of law and philosophy without finishing his studies. After having created some traditional landscapes, in the second half of the 1950s he started towards an intense research of experimentation conducted, progressively, both on a technical-material level and on an aesthetic-conceptual one. He initially approaches the abstract-informal experiences of Burri, Fontana and Fautrier. In 1955 he began creating a series of works by immersing objects in color and imprinting their imprint on the canvas; paintings made with tar followed and, in 1956, he published the manifesto Per la scoperta di una zona di immagini (For the discovery of an area of images).

In 1957 he exhibited at the Galleria Pater in Milan with Sordini and Verga and joined the Nuclear Group by co-signing the Manifesto contro lo stile (Manifesto against style). From the end of 1957 he made his first Achromes, white paintings made with canvas soaked in raw plaster. The Achromes series will follow with surfaces covered with white matter which he defined as “kaolin” (1958), felt, cotton wool and expanded polystyrene (1960), glass wool (1961), bread and stones (1962) and other materials. After the definitive separation from the Nuclear Group, in 1959 he met Castellani, Bonalumi and Agnetti; with Castellani he founded the magazine "Azimuth" and the homonymous Milanese gallery. From that moment on he developed an increasingly conceptual approach by creating the first Lines. For years he has held numerous international contacts, traveling and exhibiting in particular between Holland, Denmark and Germany. Create forty-five Corpi d’aria (Air bodies): common balloons to be inflated and put on a pedestal and then the Fiati d’artista (Artist's Winds).

On 21 July 1960 he presented his most famous performance at Azimut's: Consumazione dell’arte Dinamica del pubblico Divorare l’arte (Consumazione dell’arte Dynamic by the public Devouring art), during which he distributes hard-boiled eggs signed with the imprint of his thumb, inviting the public to eat them. Towards the end of the year he signed the Manifesto contro niente per l’Esposizione Internazionale di niente (Manifesto against nothing for the International Exposition of Nothing) signed among others by Castellani, Mack and Piene. He continues to work on the Achromes, using the most disparate materials, and designs the Base magica (Magic Base), a pedestal that elevates any person willing to climb on it to the role of a work of art. He exhibits with Castellani at the La Tartaruga gallery in Rome where he presents other Achromes and signs some Sculture viventi (Living Sculptures) live.

In 1961 he made ninety cans of Merda d’artista (Artist's Shit) sold by weight at the gold price. Starting from the concept that art encompasses the totality of reality and life on earth, Manzoni created the same year, during a stay in Herning in Denmark, the Base del mondo (Base of the world), an iron "magic base" which, as the engraving declares overturned on the same basis, “Socle du monde” supports the whole world. He continues to work on the Achromes and in 1962 he participates with the Zero group in the “Nul” exhibition at the Stedelijk Museum in Amsterdam. He died of a heart attack in his Milan studio on February 6, 1963, leaving behind a significant artistic production, which constitutes an essential point of reference, especially for conceptual and Arte Povera artists.

In the photo: Piero Manzoni during the shooting of the short film on Uova scultura (Sculpture Eggs), at the studio of Filmgiornale SEDI, Milan, 1960. (Photo Giuseppe Bellone, © Fondazione Piero Manzoni, Milan) 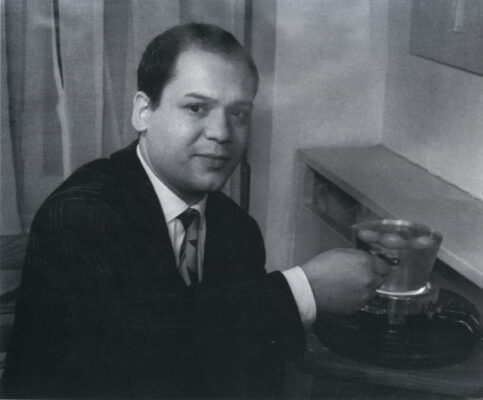