Mario Sironi was born in Sassari in 1885. His earliest training in art was in Rome where his father, an engineer, had been transferred in 1886. He registered at the life drawing school in the Rome academy of fine art. In Rome he came to know Melli and Balla and, in the latter’s studio, came into contact with Boccioni and Severini.

There are only a few traces of his earliest phase - Sironi destroyed almost all his early work – and these show his trials with Divisionism. In 1905-1906 he lived in Milan and, in the following years (1908-1911) he travelled to Paris and Germany. His works from the early 1910s demonstrate an increasing orientation to Futurism, of which he absorbed, not so much Boccioni’s researches into dynamism, as the study of the space-volume relationship based on Carrà’s constructive approach and the Cubism of Léger (Forze di una strada, 1911; Il camion, 1914). With the outbreak of the First World War he enlisted in the Voluntary Battalion of Cyclists and Motorists (together with Marinetti, Bucci, Boccioni, Erba, Funi, Piatti, Russolo, and Sant'Elia). After being demobbed, he lived in Rome for a short time where, in 1919, he held his first solo show at the Casa d’Arte Bragaglia. In the same year he settled in Milan.

In 1920, together with Dudreville, Funi, and Russolo, he signed the Contro tutti i ritorni in pittura manifesto and began to concentrate on the new theme of industrial outskirts and urban landscapes. In 1922 he began to collaborate as a graphic artist and illustrator with “Popolo d’Italia”, for which he also became art critic in 1928. He was one of the founders of the “Sette pittori del Novecento” group, formed in Milan in 1922 with the backing of Margherita Sarfatti and the gallery owner Lino Pesaro. With this Milanese group he exhibited in a show in March 1923 at the Galleria Pesaro and, in 1924, took part in the Venice Biennale, where he presented some of his most important paintings (Architetto, 1922; L’allieva, 1924) based on a rigorous architectural view of the forms and volumes. At first he had an understated position in the Novecento group, but then he became part of its managing board, and exhibited in all the Novecento Italiano shows in Italy and abroad. At the beginning of the 1930s, following an ethical and civil ideal of art, Sironi began to organise shows and, at the same time, became involved with pictorial, sculptural, and architectural aspects (IV Triennale di Monza 1930; the Fascist Revolution show in Rome, 1932).

In 1933 he was part of the managing board of the V Triennale in Milan, together with Giò Ponti and C. A. Felice. On this occasion he directed the creation of a series of large murals undertaken by the leading names of Italian painting, and himself painted, in the Salone delle Cerimonie, the vast mural Il lavoro o Le opere e i giorni, at the same time writing various press articles in defence of the value and significance of mural painting (among these was the Manifesto della pittura murale, co-signed by Campigli and Carrà and published in “Colonna” on 1 December 1933). In the second half of the 1930s he undertook large-scale series of works in painting, mosaic, and sculpture (the lecture hall of Rome University, 1935; the law courts, Milan, 1936; the lecture hall of Ca’ Foscari University in Venice, 1937; the post office in Bergamo, 1938; Palazzo dei Giornali, Milan, 1939-1942). In the post-war period, and with his obligatory renunciation of public commissions, Sironi continued to work, though in a more secluded way, often investigating themes taken from the city outskirts, which he dealt with in a more vibrantly colourful way, and created canvases from which can be seen his vocation for monumentality and murals.

In the 1950s his painting arrived at new solutions: in the Moltiplicazioni series, compositions of objects and fragments of landscape were inserted into well-structured and superimposed spaces. In 1952 he refused a solo show at the Venice Biennale and, instead, exhibited at the Galleria del Cavallino in Venice. In 1954 he was awarded the Luigi Einaudi prize by the San Luca academy – of which he was to be elected a member by a unanimous vote – and a gold medal for “cultural merit” by the ministry for public education. In 1960 he painted the outstanding Apocalissi series. He died on 13 August 1961 in Milan after having been awarded the Premio Città di Milano. 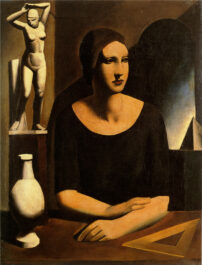 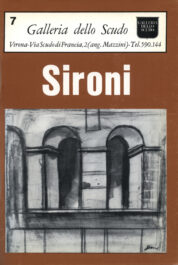