Lucio Fontana was born in Rosario de Santa Fé in 1899, son of a sculptor of Italian descent. He studied in Milan, and in 1922 he returned to Argentina with his father, with whom he worked until 1924, when he opened a sculpture studio on his own. Returning to Milan in 1928, he entered the Brera Academy and became a student of Adolfo Wildt, graduating in 1930. In the same year he made Uomo nero, which reveals a very personal style drawing from post Cubism. Always in 1930 he participated for the first time in the Venice Biennale with two groups, including the bronze Vittoria alata and then held his first solo exhibition at Galleria del Milione, where he exhibited regularly in subsequent years.

In 1931 he created the first “graffiti tablets” in colored concrete, engraved with a gestural sign. Since then, and throughout the following decade, Fontana alternated figurative and abstract production. In 1934 he joined the group of Italian abstractionists (among which Melotti, Soldati, Reggiani, Licini) gathered around Galleria del Milione; the following year, with some of them he supported the Parisian movement Abstraction-Création and signed the manifesto of the Prima Mostra Collettiva di Arte Astratta Italiana held in the studio of Enrico Paulucci and Felice Casorati, in Turin. In 1935 he began to experiment with ceramics. Before leaving Italy, he approached Corrente, exhibiting at a show of the group (Seconda mostra di Corrente, Milan, Galleria Grande, 1939), even without sharing the official position of the movement. In 1940 he embarked for Argentina, where during the war years he worked in a predominantly figurative style.

1946 is a decisive year for his research: he founded in Buenos Aires the Altamira Academy with Jorge Romero Brest and Jorge Larco. The Academy became a center of young artists and intellectuals with whom he drew up the Manifesto Bianco (but didn’t sign it). This document contains the ideas representing the theoretical principles of Spatialism, which Fontana, returning to Italy in 1947, developed through a series of five manifestos elaborated between 1947 and 1952 (Primo manifesto spaziale, 1947; Secondo manifesto, 1948; Proposta per un regolamento, 1950; Quarto manifesto dell’arte spaziale, 1951; Manifesto del movimento spaziale per la televisione, 1952). Until 1949 he devoted himself intensely to sculpture, participating with five pieces in the Venice Biennale of 1948 (to which, in addition to previous participations, he was present continuously until 1968).

From 1949 is the Ambiente Spaziale (Spatial Environment) at the Galleria del Naviglio in Milan, with three-dimensional shapes illuminated by Wood's light. In 1951 he realized the large neon (about 300 meters long) exhibited at the IX Triennale in Milan (1951), conceived as a pure sign of light in space. The following year he exhibited he exhibited the first canvases with the “holes” at Galleria del Naviglio, Milan. Fontana had started the “holes” in 1949, a motif that he also used in architectural contexts (hole ceilings for Breda and Sidercomit pavilions, both created in collaboration with the rationalist architect Luciano Baldessari on the occasion of the XXXII Milan Fair, 1953).

Between 1952-1953 he conducted parallel experiments creating his first Costellazioni, and subsequently the Concetti spaziali series sprinkled with fragments of colored glass (Pietre). In the following years he continued his activity as a ceramist, in which his recent spatial experience converged. In 1958 he proposed at Galleria del Naviglio, Milan (Attese series), the first “cuts”, which the artist experimented also in sculpture, in the Nature cycle (1959) and, from 1961, on metal. Together with the “holes”, this motif became unmistakable and iconographic of his production. Always in 1961 he made a series of works dedicated to Venice (exhibited at the Arte e Contemplazione exhibition, Venice, Palazzo Grassi, and New York, Martha Jackson Gallery, 1961). During the 1960s he created the cycles La fine di Dio (exhibited in Milan at Galleria L’Ariete, 1963), monochromatic oval canvases perforated by a series of holes; Teatrini (1964), and Ellissi (1967), in lacquered wood. He died in Comabbio, in the province of Varese, on September 7, 1968. 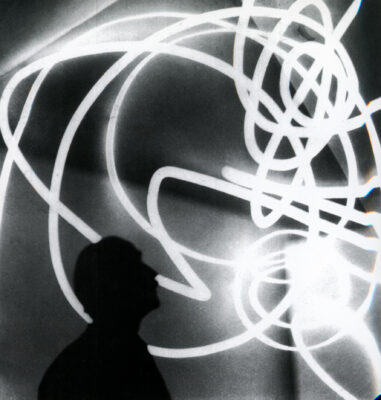 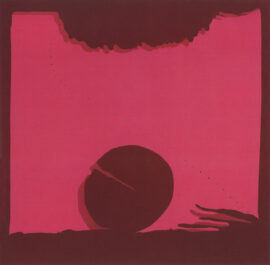 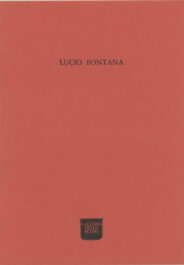