Gino Severini was born in Cortona in 1883. He moved from Tuscany to Rome in 1899 where he frequented Boccioni and Balla, demonstrating an explicit interest for the Divisionist ideas. In 1906 he settled in Paris and became friends with Modigliani, Dufy, Utrillo, Braque, Picasso, Gris, and Jacob. In the meantime he frequented the poet and dramatist Paul Fort, whose daughter he was to marry in 1913, and the group of writers who would meet up in the Cloiseries de Lilas.

In 1910 he was one of those who signed the first Manifesto della pittura futurista, and then the Manifesto tecnico della pittura futurista. In 1912 he took part in the Futurist exhibition held at the Galerie Bernheim-Jeune in Paris, and then in London in 1913. At the same time however, he did not forget his interest in Cubism, even while remaining faithful to a dynamic conception of the object represented. In this period he began his Cubist-Futurist interpretations of the war, works which were exhibited in a solo show at the Galerie Boutet de Monvel in 1916. In that period Severini revealed an early and stunning new proposal of Classicism in which he searched for a full and calm figuration, as can be seen in the paintings Maternità and Ritratto di Jeanne.

In 1919 he signed a contract with the Parisian dealer Rosenberg who was assembling various artists around the Galerie de l’Effort Moderne. However, he did not overlook his relationships with Italy. In fact, in 1919, together with Rosenberg, he edited the second issue of the magazine Valori Plastici and formalised the group’s relationship with contemporary work in Paris. In 1920 he began writing the text of Du Cubisme au Classisme, published in the following year, though it was treated with great reserve by the French.

In 1921 thanks to the mediation of Rosenberg, he had been asked to fresco the interior of Montegufoni Castle, in the Tuscan countryside, the property of the aristocratic Englishmen Osbert and Sacheverell Sitwell, representing themes taken from Italian commedia dell’arte. Having returned to Paris, Severini became influenced by Jacques Maritain; at the same time as Jacob, Cocteau, and Denis, he became interested in the expression of the mystical character of religious painting. From 1924 to 1934 he devoted himself almost exclusively to the sacred art, in large fresco decorations and mosaics: he decorated the churches in Semsales, in the canton of Freiburg, and La Roche; then the churches of Tavannes, in Switzerland, and Saint Peter’s church in Freiburg. In 1926 he took part in the first exhibition of the Novecento Italiano group, though only in the catalogue and not in the actual exhibition. He was, instead, present in the second show of the group. In 1929 he painted some canvases for a room in Rosenberg’s home, once again based on the theme of the commedia dell’arte against a background of Piranesi-like ruins.

After the success of the solo show in Amsterdam in 1931, in the following year he exhibited at the Venice Biennale in the section devoted to the Italiens de Paris. In 1933 he created the large mosaic wall for the reception hall of Palazzo della Triennale in Milan. During the 1930s, despite the dramatic loss of his son, Severini continued to paint, above all decorative series with sacred subjects, as in the apse of the church of Nôtre Dame in Lausanne, a building designed by his architect friend Dumas. In the same decade he designed sets for the Maggio Musicale Fiorentino in Florence, and La Fenice theatre in Venice.

In 1945-46 he made the preparatory cartoons for a Via Crucis, realised in mosaic in his hometown of Cortona. His late production, until 1940, once more made use of pointillism and a Cubist-Futurist compositional layout, at times with a Dada influence. After an exacting anthological show organised by Palazzo Venezia, Rome, he returned to Paris where he was to die in 1966. 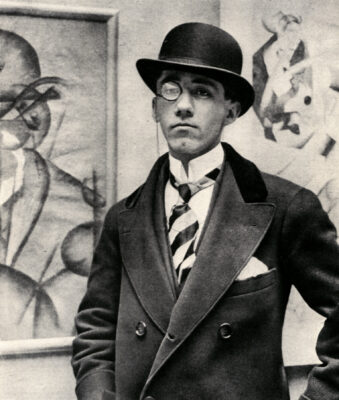