Giacomo Balla was born in Turin in 1871. In about 1891 he frequented for some months the Albertina Academy, until 1895, when he and his mother moved to Rome where he made friends with Duilio Cambellotti and Serafino Macchiati. He painted in a Divisionist manner with a social bent similar to that of Morebelli and Pellizza. He was interested in the world of marginalised people and took part in the activities of the Scuola della Campagna Romana together with Giovanni Cena. After having spent seven months in Paris in 1900, he returned to Rome. His studio in Via Porpora was a meeting point for Severini and Boccioni. In 1903 he took part for the first time in the Venice Biennale, and in 1909 exhibited at the Salon d’Automne in Paris, and the Salon in Odessa.

In his series Compenetrazioni iridescenti (1912-1914) the study of the dynamic function of the decomposition of light is rendered through abstract compositions, based on the interlocking of triangular forms. In 1912, the year in which he decorated the home of Lowenstein in Düsseldorf, he took part in the exhibitions of the Futurist group in Rome, Rotterdam, Berlin, and Florence. In 1913 he auctioned off all his figurative works, saying “Balla is dead. Here we are selling the works of the late Balla”. In 1914 he began to compose “words in freedom” and took part in the Futurist group’s interventionist activities. He published the manifesto Il Vestito Antineutrale.

In 1915 he and Marinetti were arrested. Together with Depero he published the Ricostruzione futurista dell'Universo manifesto which promoted Marinetti’s idea of art works as “presence”, “object”, and “action”. This marked the beginning of a period of sculptural researches with various materials (Linea di velocità + paesaggio, bronze relief, 1914). Again in 1915 he held an important solo show in Rome in the Angelelli room. In 1916 he co-signed, together with Marinetti, Corra, Settimelli and Ginna, the Manifesto della cinematografia futurista. He collaborated with the Florentine Futurist magazine L’Italia Futurista and was involved as author and actor in the film Vita Futurista. In 1917, for Diaghilev’s Ballets Russes in the Constanzi theatre in Rome, the kinetic-light scenery for Stravinsky’s Feu d’artifice. In 1918 he held a solo show at the Casa d’Arte Bragaglia in Rome and, in its catalogue, published the Manifesto del colore. In 1919 he took part in the Grande Esposizione Nazionale Futurista at the Galleria Centrale in Palazzo Cova, Milan. In 1920 he became part of the editorial board of the Roma Futurista magazine.

In 1920-1921 he participated in the Exposition Internationale d'Art Moderne in Geneva, and in two other shows of the Futurist group in Paris and Prague. In 1921 he created the decoration and furnishing for Bal Tik-Tak, a Futurist-style ballroom. In the 1920s he took part in most of the Futurist exhibitions: Macerata in 1922; Turin, Rome, the third Rome Biennale, and New York in 1925; the Venice Biennale and Boston in 1926; Bologna, Turin, Palermo, and Milan in 1927; Imola and Turin in 1928; Fiuggi, Rome, Milan, and Paris in 1929; the Venice Biennale in 1930; the Rome Quadriennale in 1931; and again in Rome in 1932. In 1925 he took part, together with Depero and Prampolini, in the Exposition Internationale des Arts Décoratifs et Industriels Modernes. In 1926 he collaborated with the Roman newspaper L’Impero and, in 1927, with Vetrina Futurista. In 1929, together with Benedetta, Depero, Dottori, Fillia, Marinetti, Prampolini, Somenzi and Tato, he co-signed the Manifesto dell'Aeropittura.

In 1937, the year after his participation in the Cubism and Abstract Art exhibition in New York, he broke polemically with Futurism and stated that “pure art is to be found in absolute realism, without which one falls back into decorative and ornamental forms”. From 1948 onwards he returned to Futurist painting. He held solo shows with Futurist works in Rome, Milan, and at the Rome Quadriennale in 1951; Florence in 1952; New York in 1954; Rome in 1956; and Paris, Milan, Madison (U.S.A.), and Turin in 1957. He died in Rome on March 1st, 1958. 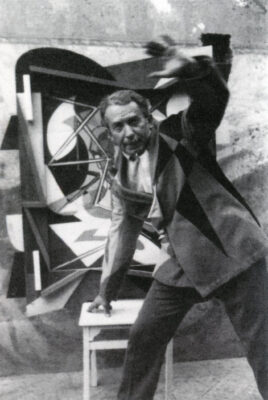