Fausto Melotti, born in Rovereto (Trento) in 1901, moved with his family to Florence, where he completed his secondary studies. In 1918 he enrolled in the Electrotechnical Engineering course of the Faculty of Physics and Mathematics of the University of Pisa and graduated in this discipline at Milan Polytechnic in 1924. Later he studied music and began to take an interest in sculpture: he attended the Turin studio of Pietro Canonica and enrolled at Brera Academy in the course held by Adolfo Wildt. Here he met Lucio Fontana, with whom he established a deep and lasting friendship.

Graduated in 1928, he took part in Milan Triennale in 1930, 1933 and 1936. His solutions were increasingly based on a geometric abstraction understood as a kind of metaphysics, even if he continued with figurative production for some time. Sculpture gradually became the place of subtle, fragile, precarious, magical, suspended balances made of opposing energies. In May 1935 the artist held his first solo show at Galleria del Milione, exhibiting some abstract sculptures (in plaster, clay, painted and chromed metal) with neo-plastic and neo-metaphysical rigor.

His works feature pure and decanted forms that are severely and rigorously oriented to give consistency and meaning to space. Canons, calculations, counterpoints, themes with variation that reveal an Olympic conception of geometry as a warm and calm rhythm of existence. Always in 1935 he joined Abstraction-Création and participated in the I Mostra dell’arte astratta italiana held in Turin in the studio of Casorati and Paulucci. The plastic works of the second half of the Thirties show some sort of retreat towards more traditional solutions (I sette savi, 1937, and the four allegories exhibited at the entrance of the VII Milan Triennale in 1940: L’Architettura, La Pittura, La Scultura and La Ceramica).

From 1941 to 1943 he moved to Rome, where he mostly drew and wrote poems which were published in 1944 in Milan by Scheiwiller with the title Il triste Minotauro. In 1943, while in Rome, his Milanese studio was hit by a bomb that caused the destruction of many of his works. During the first years of the postwar period Melotti devoted himself mainly to ceramics, declining its language with particular attention to the chromatic values of the different materials.

In 1951 he received the Grand Prix of Milan Triennale. In 1956 Melotti exhibited for the first time at Galleria Annunciata in Milan his pictorial work, which made use of free signs suspended in the magic of color. In the 1960s the artist resumed meditating on abstract-geometric shapes enriched by a subtle sense of panic (which at times openly refers to the natural order) composed in a highly dematerialized, suspended and fantastic system. Shapes are thin and light threadlike metal structures, moving with each movement of the air. Short bits of colored fabric are often attached to their tops. These works effectively merge a formal measure given by mathematical relationships with a strong fantastic impetus expressed in a strong vocation for bricolage, thus merging constructivist intentions and surreal thrills in a magical agreement.

The theaters are small rooms in terracotta houses from which a wall has been removed: no theatrical effect, rather they are inhabited by an intimate and private sense. No material satisfaction: pure intense essential invention of patterns of signs in space. In 1967, with an exhibition at Galleria Toninelli in Milan, Melotti began a hectic exhibiting activity both in Italy and abroad. In these years the artist carried out an intense graphic activity, creating numerous etchings and lithographs. In 1974 Adelphi publishing house published Linee, a story of writings and poems. The 1986 Venice Biennale presented a retrospective review. The artist died in Milan on June 22, 1986. 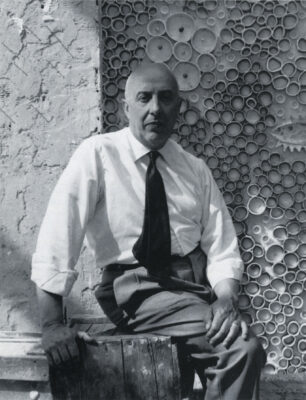 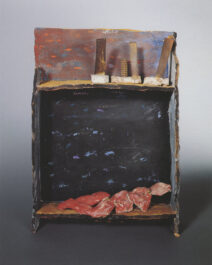