Carlo Carrà, born in Quargnento, in the province of Alessandria, in 1881, after a youthful commitment to mural painting, which in 1900 took him first to Paris, where he decorated some of the pavilions at the Universal Exposition in Paris, and then to London, he enrolled in 1906 at Cesare Tallone’s course at the Brera Academy in Milan. Here he comes into contact with the context linked to Lombard Divisionism, also opening up to symbolist suggestions, through his friendship with Previati, Grubicy, Bonzagni and Romani.

In 1908 he met Boccioni and Luigi Russolo. After joining the Marinetti movement, with Boccioni, Russolo, Severini and Balla, in 1910 he signed the Manifesto della pittura futurista and the Manifesto tecnico della pittura futurista and in 1912 he was the author of the manifesto La pittura dei suoni, rumori, odori (1912). From this period are the paintings Notturno in piazza Beccaria (1910) and I funerali dell’anarchico Galli (1910-11).

On the occasion of his trip to Paris in 1912 with Boccioni to organize the exhibition of Futurist painting at the Galerie Bernheim-Jeune, Carrà comes into contact with the Cubists: in his works of 1912-13 he moves further and further away from the Futurism by Boccioni  centered on the breakdown of moving objects and the description of speed, and matures a personal constructive approach that leads him to be closer to the Florentine group of “Lacerba” , and in particular Ardengo Soffici. In 1913 he signs the Manifesto della pittura dei suoni, rumori, odori and the Programma politico futurista and realized paintings such as Donna + bottiglia + casa (1913), and between 1914 and 1915 he works a lot with collage. These are the years he writes Parlata su Giotto and Paolo Uccello costruttore, critical essays published in 1916 on the Florentine "La Voce".

His approach to antique painting was a result of his admiration for its volumetric rigour in the construction of bodies in space. A part of this attitude is to be found in such paintings as L’Antigrazioso or Bambina e Gentiluomo ubriaco (both from 1916). Called up in 1917, Carrà was posted to the military hospital in Ferrara where he met de Chirico, Savinio, and De Pisis. In 1917-1919 he developed a personal vision of Metaphysical painting which led him to go beyond the more obviously de Chirico-like enigmatic motifs of La camera incantata (1917) and La musa metafisica (1917) in favour of an art more oriented to inquiring into the mystery of ordinary things (Natura morta con squadra, 1917). In 1919 he married Ines Minoja and began collaborating with the Roman art magazine “Valori Plastici”, which continued until 1921.

In the post-war period he collaborated as a designer and critic with the magazines “Valori Plastici” and “La Ronda” and, after a period of inner crisis and meditation during which he mainly devoted himself to drawing, he painted Le figlie di Loth (1919), important for its indication of his interest in fourteenth century Italian painting – which in 1924 was to lead to a monograph on Giotto – and the masterpiece of which was Il pino sul mare (1921). In 1922 he became art critic for “L’Ambrosiana”, a post he was to fill until 1938; in the same year he was invited to the Venice Biennale for the first time. Even though not officially belonging to the Novecento Italiano group he was present at the first and second of their shows at the Permanente in Milan (1926 and 1929). In 1926 he painted L’attesa, one of the most emblematic works of the current Magical Realism atmosphere. In the years 1927-1928, during long summer holidays in Forte dei Marmi, he developed a new idea of landscape, one reinforced by his rethinking of Cézanne’s example (Meriggio, 1927; Cancello, 1927; Foce del Cinquale, 1928).

From 1930 onwards he flanked his landscapes and seascapes with a new interest in the human figure (Estate, 1930; Le figlie del pescatore, 1932; I nuotatori, 1932). In 1933, on the occasion of the fifth Triennale, he helped with the decorations of the Palazzo dell’Arte in Milan to which he contributed a mural (since destroyed). Still in the area of public commissions are the decorative panels he made for the sixth Triennale in Milan (1936) and the mural paintings for the Milanese law courts (1938).

Due to his distinction, in 1941 he was awarded the professorship of painting at the Brera Academy and, in the following year, Dell’Acqua and Pacchioni arranged a solo show of his work at the Brera gallery. Besides his activity as a painter, Carrà continued to work as an art critic and theoretician, and published Il rinnovamento delle arti in Italia (1945) and Segreto professionale (1962), collections of his writings about art. He devoted himself to an intense activity as an illustrator (he illustrated Quasimodo’s translation of the Odyssey; Mallarmé’s Un coup des dés, 1945; Rimbaud’s Saison en enfer, 1946; and Ungaretti’s translation of Mallarmé’s L’après midi d’un faun, 1947).

In 1950 he was given a room to himself at the Venice Biennale where he was awarded the prize for Italian art. In the final years of his life he received important awards and honours, such as the solo show in London in 1960, and the anthological show at Palazzo Reale in Milan in 1962. He died in Milan on 13 April 1966. 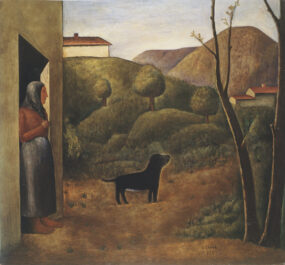 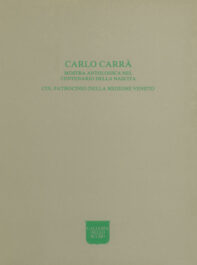