Amedeo Modigliani was born in Livorno in 1884. In 1898 he began to attend the painting school of Guglielmo Micheli, as a pupil of Fattori, in Livorno after he dropped out of high school because of a lung disease which, due to a relapse, led him in 1901 to recover in southern Italy. In 1902 he enrolled in the Academy of Fine Arts in Florence, attending the lessons of Fattori at the Free School of Nude and sharing the study with Oscar Ghiglia, with whom he participated in the artistic life of the city with Costetti, Gemignani, Lloyd, Sacchetti, Andreotti; in 1903 he moved to the Venice Academy.

Like Alfredo Müller and other Livornese painters of his time he tried to overcome the now tired legacy of the “Macchiaoli” by taking an interest in the novelties of the Secessions and moving away from the city of origin, until in 1906 he landed in Paris, where, while getting to know the fauves and the Cubism, of Japanese art and painting by Klimt and Toulouse-Lautrec, particularly approached the lesson of Cézanne, (Mendicante di Livorno, e Violoncellista, 1909-1910).

In 1907 he met Paul Alexandre, who bought him some paintings and got him an atelier. He became a member of the Société des Artistes Independants and began exhibiting: five oils and a drawing at the Salon of 1908, six paintings at the Salon des Indèpendants in 1910, and at the Salon d’Automne in 1912 – together with de Chirico, Arturo Martini and Gino Rossi – seven sculptures (Têtes). In fact, in 1909 Alexandre had introduced him to Brancusi, who introduced him to art nègre and began it to sculpture, to which he devoted himself until 1913. In addition to the black art he had to be important for this phase the study of Egyptian art in the Louvre.

In 1914 he met the English poet Beatrice Hastings, who was his companion for two years, and Paul Guillaume, his client and protagonist of one of his most famous portraits (1916) now at the Galleria Civica d’Arte Moderna, Milan. In this year he started painting again, going through an experimental phase at Seurat, evident in the portraits of Diego Rivera and Frank Havilland. He approached then Picasso’s neoclassicism but from 1915, through the influence of the line of Art Nouveau and with the resurgence of his Italian culture of the fourteenth and fifteenth centuries, his style matured, now free from any cultural solicitation, aimed at finding a clear shape and a deep sensitivity to the color that comes from the knowledge of Tuscan painting

After a brief working relationship with Guillaume Chéron, in 1916 he began collaborating with Lèopold Zborowski, who as friend and merchant became the important support of his desperate existence: in December 1917, thanks to the Polish-born poet and gallerist, he held his first solo show at the Galerie Berthe Weill, which ended without any sale after withdrawing from the windows his nudes considered by the public to be scandalous. A second and luckier exhibition in London, also organised by Zborowski, will follow in 1919.

At the end of 1917 the relationship with the young Jeanne Hébouterne had begun, with whom Modigliani went to Nice and Cannes in 1918 because of his poor health; here in 1919 his daughter Jeanne was born, who throughout her life devoted herself to cataloguing her father’s work. In 1920, in Paris death came prematurely for Modigliani, just when his art, in addition to his original language, had begun to find favour with the public. 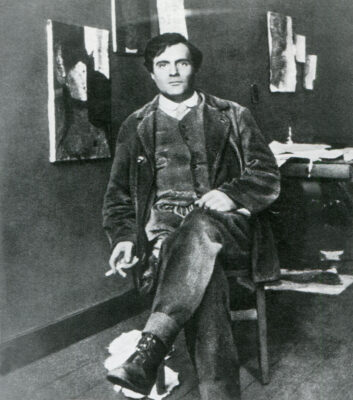 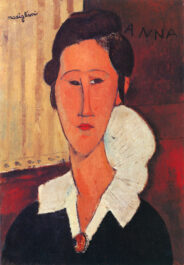