Alberto Savinio (pseudonym of Andrea Francesco Alberto de Chirico) was born in Athens in 1891, the third son of railway engineer Evaristo de Chirico and Gemma Cervetto, brother of the painter Giorgio de Chirico and Adele, firstborn, who died in 1891. He studied piano and composition at his hometown Conservatory, where he graduated with flying colours in 1903.

He lived in his childhood in Greece, then on the death of his father in 1905, he moved with his mother and brother George to Munich. In 1909 he was in Milan, where, according to his brother's testimony, Savinio already dedicated himself to painting and drawing. Then in 1910 he moved to Paris where he came into contact with intellectuals gravitating around the figure of Guillaume Apollinaire. From the beginning of 1914 he presented himself under the pseudonym Alberto Savinio, publishing "Les chants de la mi-mort" in issue 3 (June/August 1914) of the magazine Les Soirées de Paris.

In 1915 he returned to Italy with his brother Giorgio. Both of them staid in Florence and, enlisted in the Italian army, were destined for the 27th Infantry Regiment in Ferrara, where they already had contact with the artistic circle of Filippo de Pisis and Carlo Carrà. In 1916, in order to escape the isolation and boreness of military life, he softened relations with Giovanni Papini and Ardengo Soffici and began collaborating on Giuseppe De Robertis's La Voce, where the first chapters of Hermaphrodito appeared in serial stakes.

After the end of the First World War he was transferred to Milan and from 1923 he settled in Rome, where he has already published theoretical and narrative texts, especially in magazines such as Valori plastici and La Ronda. In 1924 he was one of the founders of the "Compagnia del Teatro dell'Arte", directed by Luigi Pirandello, for which he wrote (without staging) Captain Ulysses.

In 1926 Savinio returned for the second time to Paris where he settled together with the dramatic actress Maria Morino, who had since become his wife. It is a particularly intense period for the artist. In 1927 he had a solo exhibition at the Galerie Jacques Bernheim in Paris, presented in the catalogue by Jean Cocteau. In this period he met the critic Waldemar George, with whom he established a profitable cultural relationship; intensifies his relationship with the merchant Léonce Rosenberg and with the world close to French surrealists.

In the 1930s he began to exhibit frequently in Italy and abroad, and he began to take part in the Venice Biennale and the Quadriennale in Rome. In these years, even though formally influenced by his brother Giorgio, Savinio gave more importance to symbolic, evocative, and literary content, while at a technical level he was distinguished by more filamentous brushstrokes and the use of a more veiled chiaroscuro, at times with iridescent characteristics. His paintings became populated by mutant and imaginary beings, half man and half toy; they became progressively enriched with an more overt irony and a visionary capacity that was, in any case, the outcome of an uneasy spirit fed by a polymorphous culture and by different experiences and contaminations. In 1938, André Breton included him (only Italian) in the Anthologie de l'humour noir.
In 1940 he exhibited in Milan at the Galleria Il Milione and, in later years, mainly devoted himself to graphic art. In fact, his solo show at the Galleria dello Zodiaco, Rome, in 1943 was of drawings, as was his show at the Galleria della Margherita in 1945.

In 1952 he directed and designed the sets and costumes for Rossini’s Armida at the Maggio Musical in Florence, with Maria Callas. As a journalist he collaborated with various newspapers and magazines; as a musician he composed the ballets Perseo, La morte di Niobe, and Ballata delle stagioni. He left a great many works as a writer: essays, autobiographical memories, and novels, many of which were inspired by the art world; and among which you remember Narrate uomini la vostra storia (1942). Savinio died in Rome in 1952. In 1954 he was dedicated a retrospective to the Biennale with a presentation in the catalogue by Libero De Libero. In 1955 he was dedicated a retrospective exhibition as part of the 7th Quadriennale in Rome curated by his brother, the painter Giorgio de Chirico. 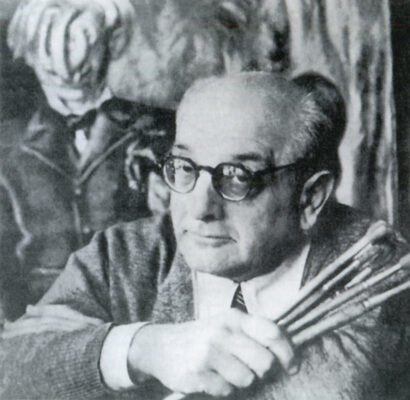